Pick up Galaxy players this week. 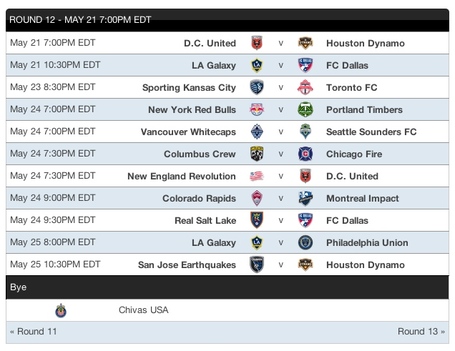 So remember what I said last week about how things can and will go horribly wrong? Well, it happened to me. For the first time all season, I dropped in the rankings.

Captaining an injured Aurelien Collin had something to do with it, and really, that tells the story doesn't it? MLS fantasy league is a game of skill, but there's also some luck involved.

I also thought I made a smart move choosing to overlook Dom Dwyer, who I didn't like for a number of reasons.

And despite Dwyer seeing limited minutes and Sporting KC having a terrible week, he scores twice anyway.

But as deflating as it is going from this to feeling like poor old Harry after a bad week, it's important to have confidence in your roster. If you know you made smart choices based on the right logic, you can shrug off bad results due to any number of reasons. A bad bounce of the ball, a crossbar, an incorrect call, etc. Sometimes teams perform the time honored classic of not showing up. And chasing points and panicky trades just aren't efficient strategies in the long run.

Your team also needs balance. Keep in mind there hasn't been a single double game week this season where picking the best players from the best teams scores you the most points.

Also remember that every double week has featured a few differential picks who have had productive rounds. Last week, it was the Union midfield trio of Danny Cruz, Cristian Maidana and Vincent Nogueira who had monster rounds out of nowhere. A balanced squad of talented players with a smart differential or two is a strong foundation for success in MLS fantasy league.

Even if you might not have a lot of luck.

Now, a few quick tips on who to pick up this week.

You should have Dan Gargan ($6.3) in your lineup by now, but if not, Kopi Opare ($6.4) is another bargain for LA. The talented youngster has performed well and is also dangerous in the air. And with two home games this week, it's not unreasonable to expect a clean sheet from the Galaxy this round.

Opare also works if if you can't afford Bobby Boswell ($8.8), who is a quality defender but overpriced. (Plus the odds of D.C. keeping a clean sheet in New England are pretty thin)

Fabian Espindola ($8.8) is all but a must-have pick this week. D.C.'s offense is up and running again, and the streaky forward is on his game right now.

And finally, hold onto Collin! According to Peter Vermes, Aurelien Collin ($9.9) could possibly play on Friday against Toronto.

Now, I'm pretty sure Collin isn't playing on Friday, but the odds of Collin being fit in time for next round's double game week are high, so put him on your bench.

Pick of the week: Robbie Keane ($11.0) Will most likely stay for both games and skip the Ireland friendlies. If Dom Dwyer can score without Graham Zusi, Keane should be able to get on the board without Landon Donovan.

Strategery pick of the week: David Horst ($6.6) Still relatively cheap, the Dynamo center back is a bonus points machine and adds balance to your lineup.