Should you pick up Sounders this round? Kind of.

Hey fellow fantasy league managers! Ready for the round before the round? 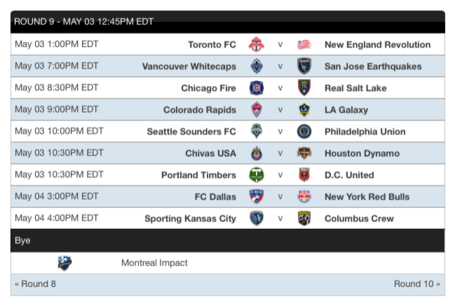 Ok, sometimes to succeed in MLS fantasy league, you have to be willing to take risks. And by that, I'm not talking about reckless transfers or low percentage plays that have little chance of succeeding, but utilizing statistics, common sense and your gut instincts to make decisions that differ from the popular opinions of other managers. (Sometimes even the experts!)

After Seattle ran over Colorado last week and Houston limped to a 1-1 draw at home, you might think the formula for this round is simple: Stock up on Sounders and maybe dump a Houston player or two.

Not so fast there, partner.

It's easy to buy into the hype whenever a team is winning. Lots of managers transfer in the most attractive players, their prices soar, and it becomes tempting to hop on the bandwagon.

Not to say the hype isn't justified. As Ben Jata explains, Seattle's offense is firing on all cylinders. Obviously, Clint Dempsey ($10.8) is out of his slump. Obafemi Martins ($9.7) is having a great year while doing the dirty work up top, and Lamar Neagle ($7.7) is quietly producing, benefiting from the deadliest forward partnership in the league.

Now Dempsey has been a must-buy for about a month, so if you haven't picked him up by now, get on it. Oba is certainly a worthy pickup and Neagle is a bargain buy.

But despite the flood of managers rushing to transfer in Oba and Lamar, I'm not sure I would pick up too many Sounders this week.

For one, it's never a good idea to have too many attackers on the same team, even one as red-hot as Seattle, since you're putting all your eggs in one basket. All three don't generate a lot of bonus points as well, and you also have to look at the Sounders' opponent this week in the Philadephia Union, who are tough to break down defensively and possibly the most vanilla team in the league on paper: They haven't scored more than twice this year, haven't given up more than twice this year, and haven't lost by more than a one goal margin.

All things considered, for your team to have a good week, the Sounders have to score at least twice, and those three have to significantly contribute. It's certainly possible, but bringing in Martins and Neagle this round isn't the easy path to points it appears to be at first glance.

On the flip side, there's the Houston Dynamo, who have been terrible.

Fortunately, a big reason for Houston's lack of goals has been the absence of Brad Davis ($10.7), who is back from an ankle injury. It's also no small secret Will Bruin ($8.4) is far more effective when Davis is in the lineup.

Like Seattle, Houston plays twice next week, but both of Houston's matches are at home. The Dynamo are also on the road this week against an ailing Chivas USA side now missing Mauro Rosales on top of Thomas McNamara, Dan Kennedy and Andrew John-Baptiste. Chivas already gives up goals, and other than Cubo Torres creating something out of nothing or another individual effort, I don't see Chivas scoring this round. Fantasy points will be had.

Is this week really about picking up Sounders and dumping Houston players?

Don't buy into the hype.

A few other things of note.

Should you keep Super Mauro? I'm with Andrew Wiebe on this one. (See above video) If you're a fan of Diaz, which you should be, at least consider keeping him around to see if he plays in Round 10, even if his price drops a bit. You could always sell him for a profit, but FC Dallas has another double game week during Round 12, and depending on when you picked him up, it could cost a lot extra to buy him back.

And finally, wIth Mauro Diaz, Mauro Rosales and Ricardo Clark all unavailable after late scratches, this round is a reminder of why it's sometimes a good idea to wait until the end of the week to make transfers.

Strategery pick of the week: Brad Davis ($10.7) With the 30 man preliminary roster for the U.S. World Cup roster set to be announced soon, look for Davis to make a positive impression.