Ready for another exciting week of the anxiety-fueled insanity that is MLS fantasy league?

The schedule for Round 11 is below. 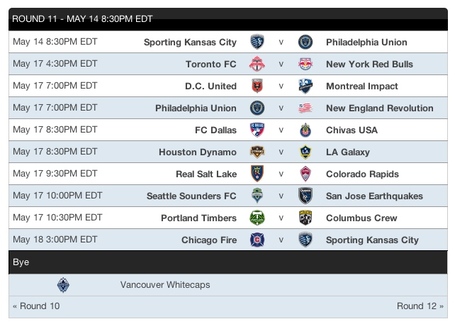 It's also the biggest challenge in fantasy league so far in this season. I know this because well past midnight last night, I still hadn't figured out my lineup. I still don't have it completely ironed out. (If you watch the Starting Lineup clip, neither does Andrew Wiebe)

If you haven't done so already, make sure to read last week's article. Knowing the fundamentals will go a long way towards helping you shape your roster for the next month.

Here's what you need to know for this week:

Cram as many double game week players into your 18 man roster as possible. With two games in rounds 11 and 13, you obviously want the maximum of four players from Sporting KC. Aurelien Collin ($10.0), Eric Kronberg ($5.3), and Benny Feilhaber ($8.3) are all must-have picks.

Full disclosure: Many of the top managers are high on Dom Dwyer ($8.3) this week, who has been on form recently, but I have my doubts.

Dwyer may have romped over a hapless Montreal side in recent weeks, scoring four goals in two games, but outside of those matches, Dwyer is only averaging 3.7 points a game. This week's match ups aren't exactly favorable, and his production may very well suffer with the loss of Graham Zusi.

So I'm opting to go with another defender in Chance Myers ($8.4), who provides offense as well as clean sheet potential. A risky move, but I'm hoping it pays off.

Remember not to sacrifice quality for quantity. It's not worth dropping, say, an elite playmaker for a mediocre defensive midfielder with two games. Javier Morales ($10.8) is one of the few players that will score you points regardless of schedule, so pick him up. Or if you need the cash, Joao Plata ($8.3) is cheaper and leads all forwards in points per game. Both also play twice in Round 14.

Dan Gargan ($5.2) and Christian ($6.7) are solid bargains if you need defenders that will score you points without sacrificing roster quality.

If you need to fill holes with cheap players however, Danny Garcia ($4.6) is FCD's attacking midfielder and a steal. Same with fellow rookie Mark Sherrod ($4.2), who scored twice for Houston over the weekend. If you want a decent squad, you're going to need a few cheap bench players anyway, so you may as well pick up potential sleeper hits.

Pick of the week: Aurellin Collin ($10.0) Expensive, and a bit overpriced, but elite players usually are, and Collin is the best defender in MLS fantasy league.

Strategery pick of the week: Fabian Espindola ($8.8) D.C.'s main weapon will look to take advatange of a weak Montreal back line, and with United playing twice next week, selecting Espindola is a win-win.