The U.S. Men's National Team takes on South Korea at the StubHub Center at 2 p.m. Pacific on Saturday. Landon Donovan will wear the armband and start while Omar Gonzalez will also start for the United States.

The United States will play South Korea in a sold-out friendly at the StubHub Center at 2 p.m. Pacific Saturday. With the rosters already out, LA Galaxy fans will be glad to see that Landon Donovan is back in Juergen Klinsmann's good favor. Donovan will not only start but wear the captain's armband. Galaxy center back Omar Gonzalez will also start for the USMNT in the 4-2-3-1 formation. 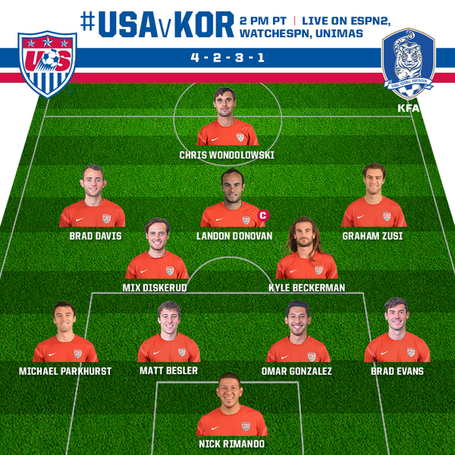 The USMNT is only 1-3-2 all-time in matches against South Korea. Saturday's match is the first between the teams since the 2002 World Cup where the teams played out a 1-1 draw in the group stage. The U.S. has one more friendly after Saturday's match before the World Cup, a game on March 5 against Ukraine in Kharkiv, Ukraine.

Feel free to cheer on the Galaxy players and the rest of the Yanks below!