Robbie Rogers and other thoughts

Robbie Rogers and other thoughts surrounding a must win game.

Share All sharing options for: Robbie Rogers and other thoughts

I had a hunch not all was well when Robbie Rogers was left off the game day roster against FC Dallas, and indeed it turns out the coaching staff is not happy with his progress.

"Robbie is moving, maybe not quite to the speed we and he would feel comfortable with…Robbie, he knows that everything needs to improve a little bit - speed, speed of play, the ability to get at players, getting crossses in - and it’s a work in progress. We’re confident Robbie will get there."- Associate head coach Dave Sarachan

When you look at his production so far, 1 assist in 6 league starts admittedly isn’t much. While he has shown flashes of his old ability on the wing, I share Dave’s sentiment that Rogers’ game needs some fine tuning.

Some fans have also questioned Roger’s commitment to the Galaxy, pointing out that Rogers is an active member of the gay community, modeling and writing op-eds in his spare time.

For the most part, such criticisms are unwarranted. Yes, it is true that playing at a high level requires an immense amount of focus, and as far as public perception goes, it doesn’t hurt to appear focused on soccer as much as possible. Still, I get the feeling most of the fans complaining about Roger’s off the field activities are at the same time venting over the loss of Mike Magee that brought Rogers to Los Angeles.

And as far as the (sadly) popular notion that the Rogers trade was a PR stunt? Let’s just say I doubt many fans would accuse Bruce of doing so to his face.

On the plus side, let’s be clear: Rogers is not fully fit. If you were to compare the period when Robbie was inserted into the lineup to say, around the time Landon returned from his granola farm on sabbatical, by the end of the season Rogers’ form should be where Landon’s was at the end of the Gold Cup. Any real critique of his play should be reserved until then.

In the meantime, hopefully Robbie looks at his omission as motivation, and not a punishment. 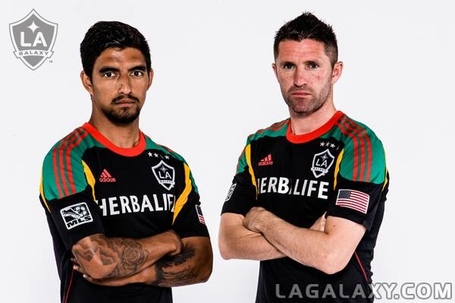 The Galaxy 3rd jersey finally makes it’s debut tonight. I like most aren’t too excited, and with good reason. It’s redundant (Is it a fan designed jersey or a retro kit?), not very pleasing on the eyes, and a mediocre substitute of the real thing. Having the fans design the third kit was a decent enough proposal that had promise but unfortunately was executed poorly.

I am however, digging these shorts Omar is wearing.

And finally, some optimism: Expect the Galaxy to play exceptionally well tonight, with some strong individual performances. Omar has re-signed and a weight is off his shoulders. Landon is in scary form. Robbie Keane hasn’t scored in three games, so you know he’s itching to get a goal. And we know Robbie Rogers now has something to prove.