The LA Galaxy have conceded an astounding 15 goals after the 76th minute of matches during the 2013 season, including eight goals conceded in stoppage time. We look at where the goals came from and who was on the pitch most often.

LA Galaxy captain Robbie Keane was asked why his club keeps surrendering goals after the 76th minute of matches this season. Keane was quoted as saying, "What do you want me to say? I can't explain it." As you'll see below, Keane is not one of the players who has usually been on the pitch when the late goals occur, so maybe he's the wrong person to ask.

By diving into the numbers behind the brutal trend of 15 goals conceded after the 76th minute, including eight goals in stoppage time, we can try to figure out what's going on. 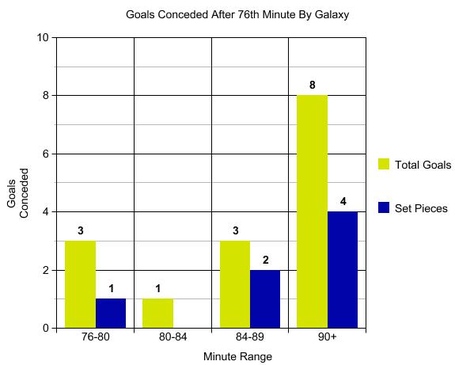 Nearly half of the conceded goals are coming from set pieces (throw-ins: 3, corner kicks: 2, free kicks: 2). If you had ever doubted the importance of defending a throw-in, it is worth noting that all three of the goals conceded following a throw-in have occurred during the 89th minute on. The only set piece goal conceded before the 87th minute in the graph above was Bernardo Anor's looping header in the Galaxy's 2-1 win over the Columbus Crew on July 4, which is probably not coincidentally the only match the Galaxy have won while conceding a late goal. Overall, the Galaxy are 1-7-2 in 2013 while conceding at least one goal from the 76th minute on. The only one of the losses that wasn't a close loss was the 5-0 pounding the New England Revolution put on the Galaxy on June 2.

Below is the most common lineup for the Galaxy when goals after the 76th minute have been conceded. 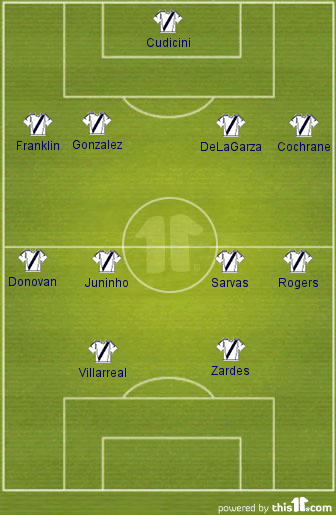 The plays which generated the goals typically began from the wings. I counted seven such plays, not including the throw-ins. This trend matches up with the Who Scored description of the Galaxy's weakness (besides giving up a lead): "defending against attacks down the wings." When the throw-ins are taken into account, 66.7 percent of the late goals started near or at the sidelines. Only one of the 15 late goals came on a shot from outside the penalty area. Six of the conceded goals were headed goals, five of which were inside the six-yard box. If that sounds like goalkeeper Carlo Cudicini isn't controlling his area like he should, it's best not look at goals like this one by Tim Cahill.

The Galaxy generally do a very good job of defending set pieces despite the goals conceded at the end of matches. I think more aggressiveness from Cudicini inside the six-yard box would help with this issue. However, defending the wings more effectively at the end of matches has to be a real priority for the rest of the season.