FIFA 14 has released the first still photos from the upcoming version of the EA Sports franchise. The LA Galaxy feature in one of the still images.

EA Sports has released its first stills of FIFA 14, as well as the first trailer. While it understandably focuses on European football, there is one MLS still. It features the San Jose Earthquakes' Chris Wondolowski taking a shot on goal past Carlo Cudicini. 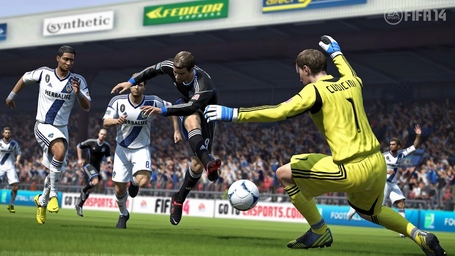 It looks like Marcelo Sarvas and A.J. DeLaGarza chasing. The background players are tougher to pick out, that's probably Sean Franklin calling for offside on the right.

The player models look great, I love how the shadows fall. They do go out of their way to recreate detail on the boots the various players wear, and have player with their right company and model. Even if that is last year's version of the Predators on Cudicini.

The generic stadium still rankles, can't EA Sports have one US based stadium? Plus those generic ads, you'd think EA would have sold that space by now to Coca-Cola or some such.

What do you think? Are you going to buy the latest version of FIFA this year?