The LA Galaxy's first goal given up against the New England Revolution came when Greg Cochrane didn't see the right place to be until it was in front of him.

As you might imagine, an LA Galaxy match which saw the defense give up five goals is a better example of what not to do than the right thing to do. Here's how the back line was positioned before the ball came into the box on the first New England Revolution goal. 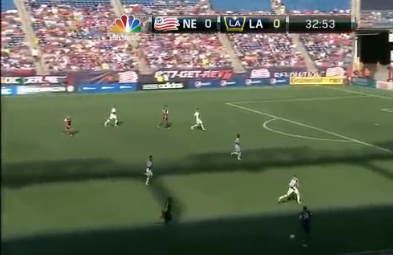 Everything looks solid, except the goal has already been scored. The back line just doesn't know it yet. Andy Farrell and Saer Sene are both commanding Greg Cochrane's attention, while Juninho and A.J. DeLaGarza try and back him up. 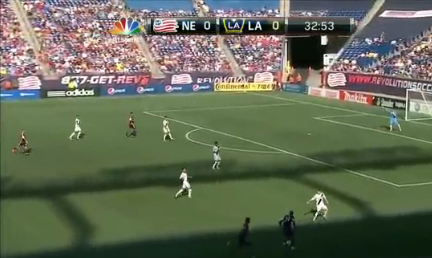 Farrell is going to overlap Sene after passing the ball off, so Cochrane points to the inside for help. Except it's been awhile since Cochrane has looked behind him. Sene can dribble inside and knowing Cochrane is backing off, he'll have no Galaxy player between him and the touchline. Still with Juninho going to mark Sene, everything will be fine so long as an eighteen year old doesn't come sprinting in for a give and go. 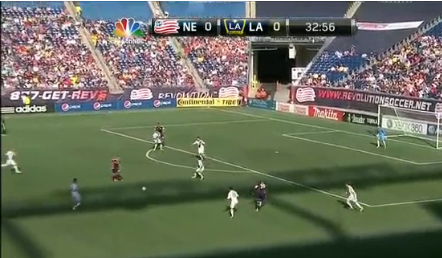 Oh no, it's a teenager! Cochrane is completely out of the play. The give and go happens as Juninho was settling down, so Sene's sprint leaves him completely behind. A.J. DeLaGarza has to step up on Fagundez and at this point, with no ball or Revolution player in the box, the only player who can stop the goal is Carlo Cudicini.

Of all the players involved in the play, Cochrane had the best view of the play developing in front of him. He knew the play was going inside, but felt he had to stay with the crosser. When Juninho stepped up on Sene, he stuck a foot out and turned his head to see where the pass was going, and that was all Sene needed to sprint into the box. Juninho shows no urgency when he turns around to see the play behind him.