The LA Galaxy were defeated 3-1 by Real Salt Lake, and the referee had much to do with that - in a positive way. Playing the advantage rule led to two RSL goals, and in both cases it was the right call by the ref.

"Did she go to China for that tea?" -Mad Men

There's nothing worse than being stuck in an awkward situation. A conversation takes an odd turn and suddenly you're looking around for someone, anyone, to get you out of there. Often in TV and movies, the awkward situation will result in a chugging ones drink, like maybe at the bottom of the glass there's a portal to another better world. One where you're not surrounded by Real Salt Lake fans after their club just scored the go ahead goal after the eightieth minute. 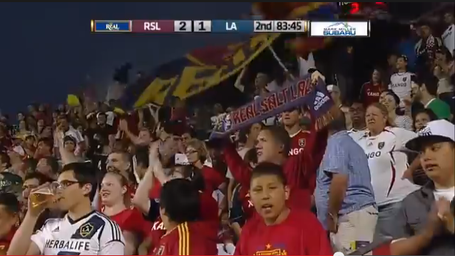 Drink up, buddy. And let me know if it got any better.

Interesting note about the first two RSL goals, both benefited from the use of the advantage rule. The PRO websiteuses the two goals to illustrate how the advantage rule works, and has nine bullets points of criteria a referee has to use while deciding to play the advantage.

You can see the referees hands raised in the air here at midfield, signaling play on despite some bumping between midfielders. No one went down, the ball remained possessed by Real Salt Lake, and there was a successful pass up the pitch so the referee allowed play to continue. 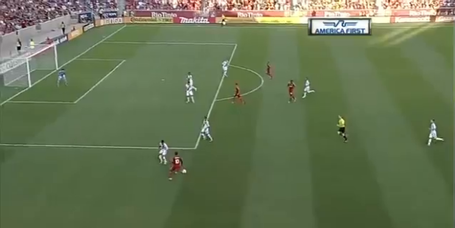 By the time RSL has gotten set up on the wing, this is how the defense was set up. Two defending in the box, two players watching the crosser, one watching the back side of the play, and two more running in. Note that eventual goal scorer Khari Stephenson is running over to receive the ball and has a man marker. Defenders will attempt an interception at both ends of the assist but will both be unsuccessful.

You can see that as the ball comes in the two defenders man marking in the box, and their mark, make a wall in front of Brian Rowe. The ball is shot through the wall, specifically through Javier Morales in the middle of it. The ball is going to be shot through Morales, and the first good look Rowe will have at it is as the ball flies between Morales' legs. Not a whole lot of time to react to the daisy clipper, but he still almost got there.

Here's the start of the second goal and again the advantage is played. Sean Franklin made a high challenge attempting to clear on a fifty-fifty ball, but Kyle Beckerman was able to recover and the advantage was played. The player in the box ratio is actually in RSL's favor, so that's not good. Javier Morales will take the ball off Beckerman's foot over in the corner, and those two players will end up with three markers 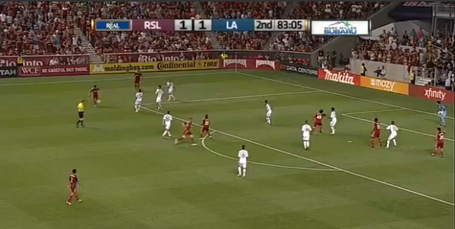 No, no, no, no. Franklin is trying to recover from his earlier challenge, but with two other Galaxy players in the area they outnumber the potential crossers while in the box there's a far post target all by himself. If Morales can get the ball far post, RSL is going to score.

The ball doesn't quite get there, and it takes a great play from Olmes Garcia to get a head on the ball. Not much blame to assign, the ball was short and a talented footballer made a great play. While he's running toward the ball he still flicks the ball across the goal toward the far post. It rainbows over Rowe's outstretched hand and nestles in the back of the net.
On both plays, the advantage rule significantly changed the outcome. A cross from the run of play and a shot from just outside the box do more for RSL than a set piece and a quick restart might have. Especially on the second goal, where playing the advantage made Franklin have to recover from his broken clearance in real time.
The advantage rule, when properly applied, works best when it leads to an attempt on goal. In those situations, the ref can rest assured that they did the right thing allowing the play to continue. The ref does have the ability to call the play back if the attacking team is dispossessed immediately, but we've all seen plays where advantage is called and then a play goes nowhere.
Teams have to, for lack of a better term, take advantage of when they're given the opportunity to continue. RSL did, pushing the ball out wide on the first goal and getting a cross into the box on the second.