The US national team is set to take on Panama in Seattle tomorrow, and ahead of the US Soccer has released an Art Chantry poster specific to the match.

The United States picked up an important three points on the road in Jamaica, and now need to continue that momentum into their next World Cup Qualifier tomorrow in Seattle against Panama. They'll face a Panama side without Blas Perez while missing Graham Zusi and Jermaine Jones themselves. Ahead of that match in Seattle, US Soccer has released another game specific poster by local Seattle artist Art Chantry. 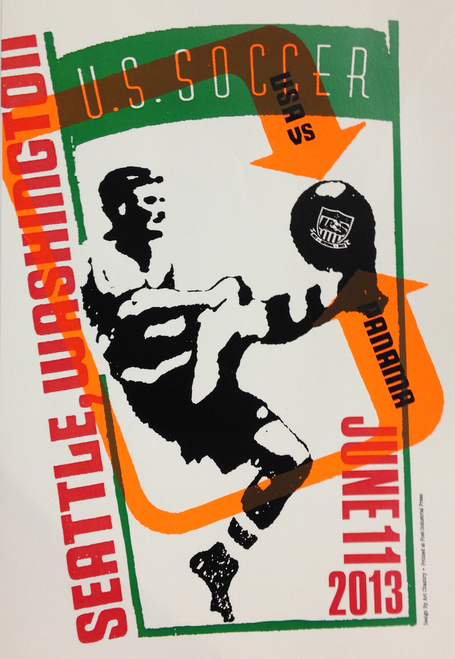 "I captured that moment of impact between the kicking foot and the flying ball," said Chantry. "That split second when the world stops mid-motion, when you don't know which way it's all going to go. It can fly directly into the goal, or it can fall off the poster entirely."

That's always the best moment in sports, when the kinetic energy of the athlete is transferred to the ball. When the athlete has done all they can, and all that's left is to watch the ball and see where it goes. Into the back of the net, perhaps, or finding a target in the middle of the defense. Watch enough sport and fans come to be able to do the math in their head, see the angle the ball is going to take from the moment it leaves.

Art Chantry is a legend in the grunge world. This blog has a picture of some of his posters on display at the Fulcrum Gallery in Tacoma. Nirvana and the Breeders feature in that photo, as well as other examples of the photo-copier fade out associated with punk and grunge and the zines of the 80s and 90s.

Great work by US Soccer partnering with a local legend, the same way they did in Nashville in 2011: