LA Galaxy's Juninho is getting a new pair of boots, a brand new silo from adidas called the Nitrocharge

It's that time of year when adidas unveils their newest soccer clear, and this year the focus is on conservation of energy. The adidas Nitrocharge makes amongst its claims energy retention, improved lateral movement, sharper on field reactions, and added sprinting power. LA Galaxy's Juninho is one of the players who will wear the new Nitrocharge on the pitch. 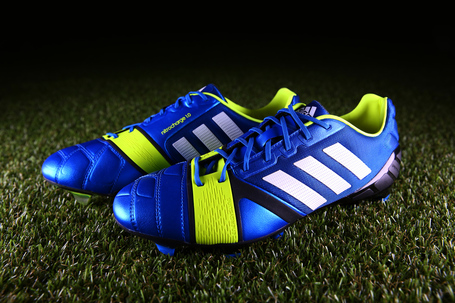 Last year adidas released an update to the Predator line with the Predator LZ control boot which David Beckham wore on the pitch. They also came out with an update to the adiZero F50 line, first launched in 2004. The new Nitrocharge is the first new soccer cleat silo since that 2004 release.

The F50 adizero line is often at the top of the boot scoring charts. Nine goals were scored wearing F50 adizero's in last summer's Euro tournament, with the Predator LZ's further down the list with six goals. Joining the light-and-goal-scoring F50s and the ball control Predators is the endurance focused Nitrocharge.

"After two years of careful development, we've created a unique cleat that caters to the relentless energy of those players who are 'The Engine' of their teams," said Ernesto Bruce, director of soccer for adidas. "adidas upholds a standard for developing innovative footwear based on athlete's specific needs and Nitrocharge represents a unique extension of that meticulous process."

As easy as it was last year to equate David Beckham with the goals of the Predator (accurate passing, dribbling, and long range shots), Juninho as the Galaxy's engine. He's the player in the midfield constantly moving, recovering balls and redistributing from the midfield.

The cleat features contrast colored arches across the top, which are there to support lateral movement. There's a zig zagging sole plate across the toe to add energy when pushing off for a sprint. There are even protection pads at the areas which are the most sensitive during tackles.

Look for the new Nitrocharge boots on Juninho's feet in the upcoming weeks.