The Vancouver Whitecaps got a brace from their budding Homegrown star Russel Teibert, and the LA Galaxy got a goal from Jose Villarreal and Gyasi Zardes. Breaking down the film from last night.

The LA Galaxy and Vancouver Whitecaps both got solid play from Homegrown players. Russel Teibert was able to make Greg Cochrane look bad, while Jose Villarreal and Gyasi Zardes were able to combine for LA's lone goal. Let's break down some film and see just what these players were able to do.

Goalkeeper Carlo Cudicini, when asked about the first goal said: "We should have done better to push the guy outside and not let him come inside and take shots. I just got a touch but it wasn't enough." 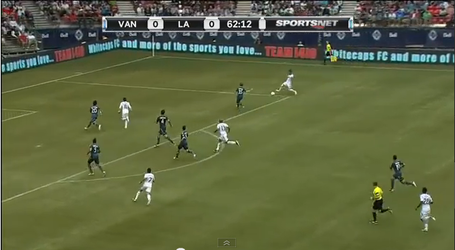 Cudicini has told us that he wanted to have his teammates push outside instead of letting folk inside. Greg Cochrane is marking Russel Teibert and is going to overrun him enough to give him the ability to go inside. A.J. DeLaGarza, Omar Gonzalez, Marcelo Sarvas, and Sean Franklin are all there should Cochrane force Teibert outside to settle for a cross. 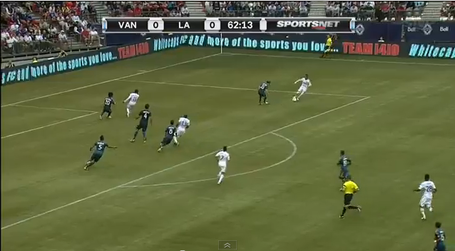 Imagine yourself a forward. You have an acre of space on either side of you. The acre closer to the goal is way more appetizing, so it's the job of the left back to make that journey impossible. Any pass and LA has it covered, but if Teibert dribbles into the happy place there could be trouble. You might not see it now, but Sarvas will be the first player to challenge Teibert, after Cochrane stares at him menacingly from a safe distance for awhile. 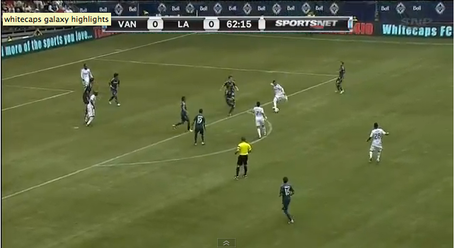 Still there are four defenders that ball is going to have to roll past. Teibert will hit the ball with enough power to split Sarvas and Cochrane then DeLaGarza and Gonzalez before it challenges Carlo Cudicini. The keeper gets a hand to it but it's hit too hard and isn't redirected enough.

The goal is scored when Teibert is able to control the ball and change direction before Cochrane can get into his defensive position. Teibert took advantage of a defender who assumed he didn't have a plan yet. Even if Cochrane expect Teibert to hold and eventually cross, he needs to put pressure on the ball and force him to the outside. 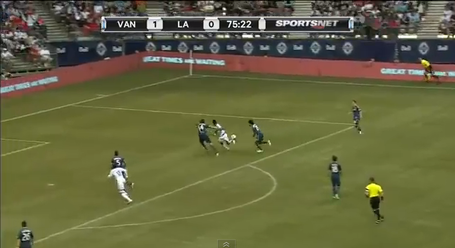 Similar story on the second goal. Teibert has just sent a ball into Gershon Koffie who has Gonzalez and DeLaGarza right on top of him. Cochrane didn't pressure Teibert, and now he's watching the play unfold in front of him. Any player wanting to make a run into the corner or into the box does so with the LA left back's back turned to them. Sure enough, Koffie will dribble to the sideline creating even more space into the box, and Cochrane won't start following Teibert until Vancouver's youngster has sprinted by him.

Yet, anytime someone goes to open their mouth about Cochrane, it's to say that Arena gamed the draft again. Cochrane is no doubt a hard worker, but here are two plays that he took off and goals resulted. All of Vancouver's key passes and assists in the box took place on the defense's left side. Praise his workrate, but Cochrane was a liability against Vancouver and the Whitecaps knew it.

Of course, it's irresponsible to rake Cochrane over the coals without acknowledging that LA are in a tough spot with Todd Dunivant hurt. Cochrane had done serviceably up to this point and Bryan Gaul hasn't played with the senior side in some time. So there's no doubting the lineup composition, it's much easier to analyze after the fact than predict what will happen next.

That said, let's continue to analyze after the fact. Those of us privileged to see Beckham for six years know that headed goals often have more to do with the service and less to do with the goal scorer. In the case of Gyasi Zardes' goal, that service came from Jose Villarreal. 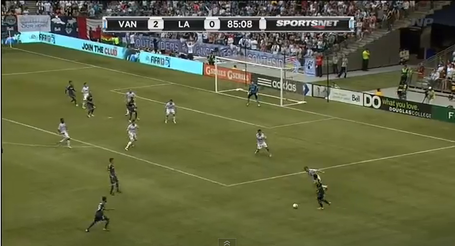 The odds are favorable, with three targets in the box marked by a lone defender each. Villarreal has created enough space for himself to send in the cross, and his target is Zardes; the closet player wearing blue. Zardes leaps up, softly redirects a bouncing header past Joe Cannon who got caught flatfooted. Landon Donovan and Colin Clark were the other targets in the box. Zardes' hair certainly makes him stand out. Three Galaxy players just outside the box with no white shirts between them, there was always going to be a good cross sent in on that play.

And that's the story of how a couple of academy players made veterans plays to score goals. LA's fortunes will improve when they get Todd Dunivant back. As for Vancouver, we may have witnessed the birth of a star last night.