On the history of everything, on the LA Galaxy's victory over Real Salt Lake, on Jack McBean's injury, and more.

If you've been following the site for any time now, you know that I'm almost obsessed with trying to come to a full picture of how soccer football began and survived in America. It shouldn't be surprising that one of my favorite youtube shows is John Green's history show for Crash Course. Even though the youtube shows, and his books (like New York Times best seller The Fault in our Stars) are aimed at teens, I just find him fascinating.

Anyhow, the above embedded show is on the Market Revolution that happened in the US before the Civil War but after the War of 1812. It's separate from the Industrial Revolution, but related, as factories needed cheep labor so they employed women and immigrants to make wares while men opened up shops in cities and sold the goods being made and suddenly a market economy was born. Folk moved off the farms an into cities, production was no longer about what you could eat and trade with neighbors, but rather production for the market became a thing.

This meant people no longer went out and did chores as their daily routine (except for the married women who stayed home and cleaned) but rather went to a job, a completely new phenomenon. Which is all to say that it's Wednesday, you're probably at work, and that's something relatively new.

Another factor in the market revolution was the improvement in transportation. National roads, railroads, canals, suddenly goods could be shipped from market to market. In this climate, organized sports became a thing. So let's talk about some organized sports. Let's break down the rest of the film relative to the LA Galaxy's road victory over Real Salt Lake.

Now when we left off the Galaxy were up 2-0, scoring on two early chances, and Brian Rowe had made a great save to keep RSL of the board. What happens next? I'm on pins and needles.

So Mike Magee scored, Brian Rowe saved, and then Charlie Rugg scored. If you're following along in your books we're at the 3:03 mark in the highlights. RSL have possession of the ball. We're inside the 17' mark on the match clock. Here we go.

Ned Grabavoy and Luis Gil are in a little cluster, and Javier Morales is going to come in from a wide position. Morales' pass is deflected but the Galaxy can't control it. We end up here, with the ball on Joao Plata's foot. There are four Galaxy defenders to three RSL players, so LA is still in control. 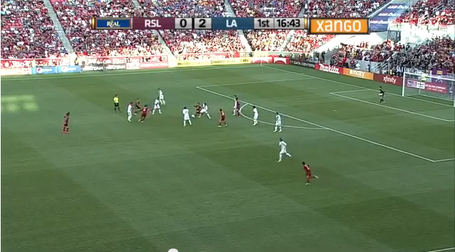 Under duress, Plata manages to find Ned Grabavoy, who has shifted into space. See how there's that line of three defenders, some space, and then that man wearing all claret by himself? That's Grabavoy. Olmes Garcia is the player posting up on Omar Gonzalez. We're about to see Grabavoy make a key pass. Can you see where it's going to go yet? 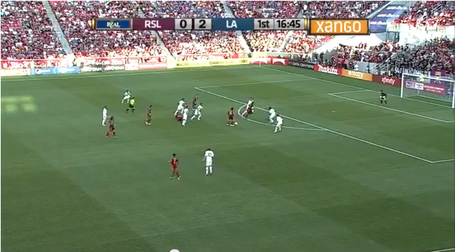 Garcia got good position on Gonzalez, and when he opens up to goal he creates a lane for Grabavoy to send the ball in. A.J. DeLaGarza knows this and is prepared to slide into the passing lane. However, the back line is a defender short and there's an acre of space just north of the play. Luis Gil is about to run into that space.

Grabavoy is going to get him the ball. That's bad. Hopefully someone on the Galaxy is good at playing defense and will continue to play the ball while running with Garcia. 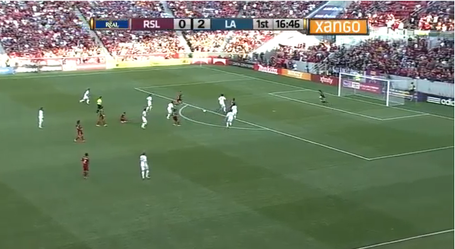 Omar Gonzalez, peelin of a striker, oo de la le, oo de la le, golly what a day. Will he get there in time? He gets there in time to pressure but not block, and Gil's shot manages to beat Rowe but goes high wide right. Without Gonzalez' pressure, that's almost a sure goal. Rowe was well off the line trying to close down angles, and with time Gil could have gone with an option other than Jeremy Clarkson style power. 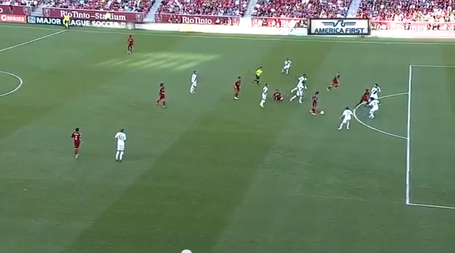 Here's another angle on the play. Look at the space Gil had for himself. If Gonzalez doesn't recognize what's happening right away, that's a goal. Let's take one more angle. 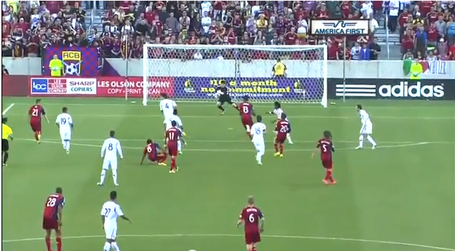 Great job by Gonzalez breaking down the space. Gil has to go left footed power shot, it'll pass Rowe before he can get his arms up, but it'll lack the accuracy to find the net. Alright, I think we understand this play, let's move on. One more before we call it an afternoon, a sad play, the one where Jack McBean fractured his collarbone. 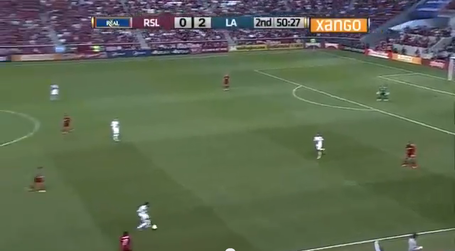 It started with a Hector Jimenez interception. Chris Schuler makes an awful pass, Jimenez intercepts it, controls it, and the break is on. Three Galaxy targets and only two RSL defenders to stop them. 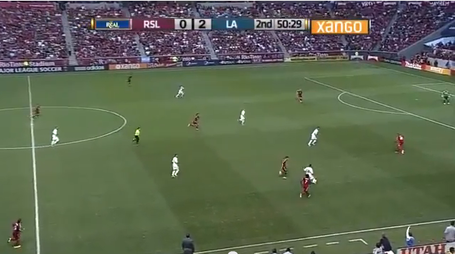 Charlie Rugg has a defender looking at him, and McBean has a defender making a beeline for him. Magee is the furthest target, but the one with the best chance of scoring with the right pass. That defender closing down on McBean, well he's about to break a teenager's collarbone. Can you infer from my tone how I feel about that? 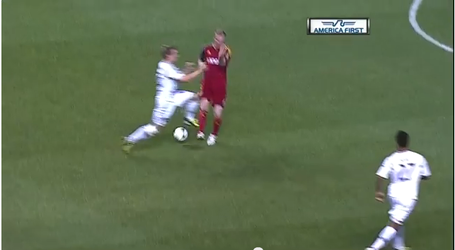 McBean is going for the step-over, and I have no clue what Nat Borchers' plan was. I don't think he planned on McBean stepping over the ball. I guess it's a bit harsh to blame Borchers for the collision, if McBean takes a touch then Borchers is right there for the block. You could even argue the collision was entirely McBean's fault, he's making all the aggressive moves there with Borchers looking ready to crumple up. Ultimately, it was just a soccer play that ended badly, hard to see malice by either player.

So we've been through the major talking points of the match against Real Salt Lake. Two early goals, solid keeper play from Rowe, great play from the back line, and losing Jack McBean to injury. The depth showing up is subtext to all this, with Charlie Rugg getting the second goal and Hector Jimenez assisting and setting up another goalscoring opportunity.