Uni Watch recently got ahold of the 1935 Umbro soccer jersey catalogue. The historical document sheds light on the longstanding relationship between soccer clubs and uniform manufacturers.

Share All sharing options for: Soccer clubs and Jersey manufacturers: A history

Uni Watch writer Paul Lukas came across a great 1935 Umbro kit catalogue recently, and the scans he's put up on the internet tell a great origin story for uniform manufacture as big business (link). The Umbro catalogue makes a great effort to link itself with FA Cup winners and international teams. That adidas and Nike are still doing this almost 100 years later makes this quite a relevant historical document. (Link to the catalogue on Flickr)

Nowadays it's considered standard practice that adidas would sponsor an entire league in MLS, or that Nike would be the official supplier of everything related to USSF. However, when Umbro became FA Cup sponsors and official ball suppliers to all the FA leagues, it was a new concept. 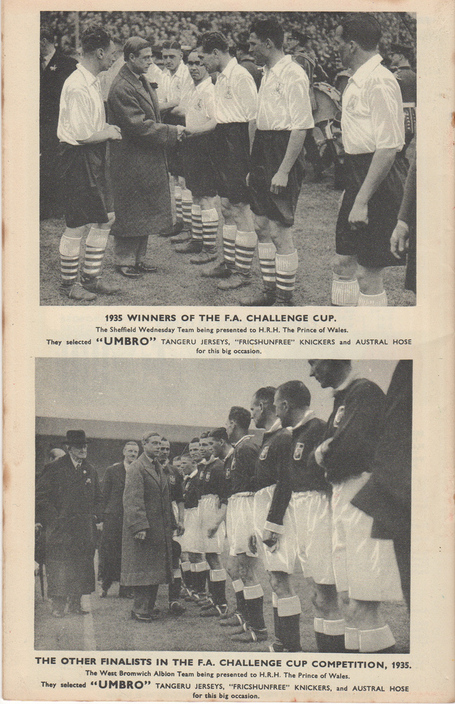 The catalogue begins with pictures of the 1935 FA Cup teams being presented to HRH The Prince of Wales (the prince would later become king just prior to WWII then abdicate his throne to marry his American divorce bride). In trying to convince teams to buy Umbro, they associate themselves with these winners and designs. The winners of the last ten FA Cups are listed. This was the second straight year Umbro was worn in the FA Cup. 1934, when Manchester City and Portsmouth were both outfitted by the supplier, was the first year it was worn in the Cup.

In a time before television, the FA Cup was one of the few times pictures of a team's kit would be shown in newspapers around the country. Bradford won the FA Cup in 1911 wearing their halo design, United in 1909 with the red chevron, and Aston Villa were FA Cup winners in 1913. All three of these clubs lend their names to specific designs in the catalogue. 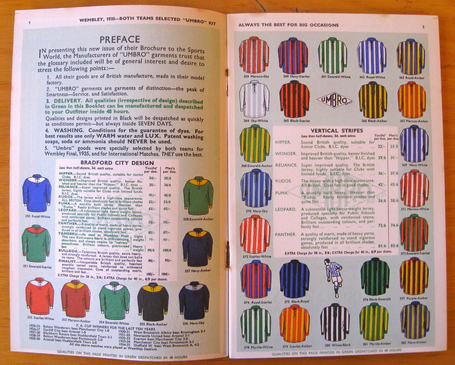 Bradford City lends its name to a shoulder halo type design. Bradford wore that design from 1909-1928 then again from 1948-1953 (link). In modern times Bradford has worn some form of vertical red and yellow stripes, with their modern Nike design going with red and yellow hoops. 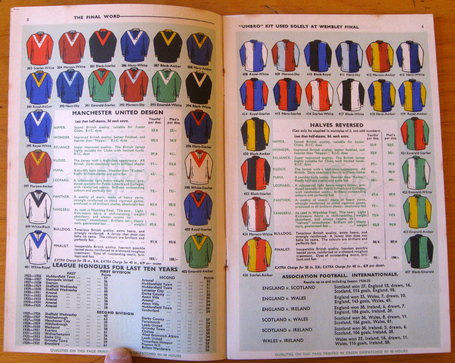 The design attached to Manchester United's name was first worn in the 1909 FA Cup final, the first Cup final won by Manchester United. Special white shirts with a scarlet chevron were commissioned, and United wore a red Lancashire rose over the heart. This shirt was then made the home shirt from 1922-1927 (link). 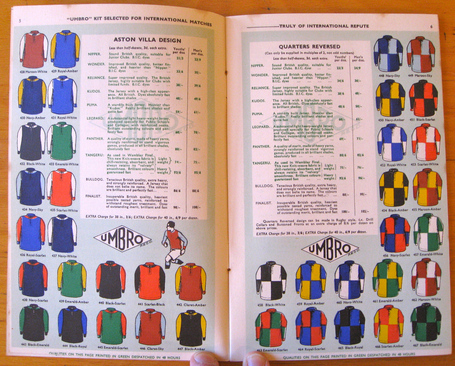 The third team is Aston Villa, who first wore their claret and sky shirt in 1890. The design has of course lasted to this day. Umbro is still attached to the English national team, and this 1935 catalogue plays up the fact that international teams wear Umbro. It lists recently international match results for England, Scotland, and Wales. 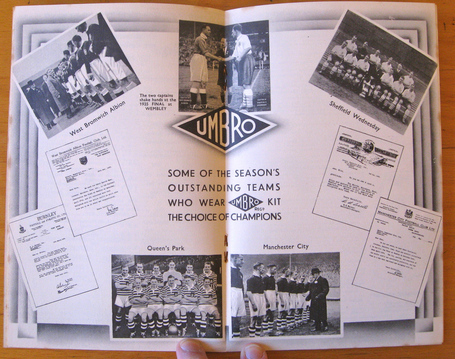 Teams doing well in league play are highlighted in the catalogue as well. The centerfold brags about the outstanding teams that wear Umbro, including the 1934 FA Cup winners Manchester City. There are also letters on the page, from club secretaries praising Umbro for how well their uniforms fit.

The catalogue also reads as a how to guide for clubs just getting started. It lists the minimum and maximum length and breadth for an association pitch. There are suggestions for putting together full kits for a club. The descriptions of quality levels from Nipper suitable for junior clubs up to Tangeru as used in the Wembley Final. There are even quality levels above that.

A side looking for the Wembley Set is advised to buy 12 Tangeru Jerseys (stripes are extra) at five pounds, 12 pairs of white knickers, 12 pairs of hose, and one goalie sweater. In the days when clubs only had one alternate, 12 kits was enough to outfit an entire team.

adidas plays this game well, bragging about an all-adidas final in the UEFA Champions League last year. Yet Chelsea has been wearing solid blue for so long, that adidas can only improve the quality of the fabric. The design is set for them.

Not so in MLS where clubs are still finding their identities. adidas can make the Galaxy a white at home club at the same time they take them from teal to blue. Nicknames have still been in flux. However, we'll get to a point soon where identities will start to lock in.

Chivas are known for their stripes because Guadalajara are known from their stripes, but Dallas' hoops have become a team specific design. The Galaxy sash has the potential to be that design for LA.

MLS only gets to be the young league finding its identity for so long. Coming up on the league's twentieth anniversary, original clubs will have a second major anniversary to celebrate. When the league reaches 35-40 years old, hopefully there will be some designs that instantly identify a club.