Share All sharing options for: Mike Magee has biggest impact on LA Galaxy victory over Fire

Mike Magee's hat trick has him as a shoe in for MLS player of the week, so it's no surprise that Magee led the team in Match Impact Rating. Magee was MLS' fantasy player of the week, and I wouldn't be surprised if Magee will show up atop the Castrol Index when it's published. 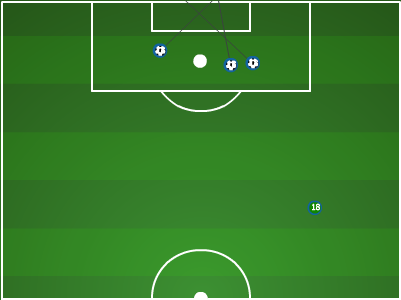 Here we've got Magee's positive events that took place in the offensive half. Look at how close all his goals were to each other, it's pretty incredible. He also won a foul down there in the bottom right corner. This was all good for a Match Impact Rating of 132, which could have been even higher but he did get called for two fouls on free kicks in the box.

Robbie Keane, with the final goal of the match, finished with a Match Impact Rating of 75.4. In addition to his goal he had the assist on Magee's second goal and won a free kick 25 yards from goal. Juninho took that free kick and his right footed shot went over the ball and would have been in without a diving save from Sean Johnson.

Juninho had two shots on target, that free kick and another from the run of play. He won three fouls, none in the offensive half, and ended up with a Match Impact Rating of 30.8. This put him slightly above Omar Gonzalez who's assist on Keane's goal gave him an MIR of 30.

Todd Dunivant was given an assist for his 50/50 ball that Magee volleyed in, for an MIR of 29.5. If you're looking for the difference between Gonzalez and Dunivant, Dunivant got a yellow card.

Colin Clark had an alright day at 13.1. Marcelo Sarvas looked good to the eye partnered with Juninho, but with four fouls conceded and no positive events he finished with an MIR of -1.1. With 46/54 passes successful, Sarvas might come out better in Castrol Index than he does in MIR.