MLS Fantasy Report: Not all assists are created equal

Share All sharing options for: MLS Fantasy Report: Not all assists are created equal

One thing to keep in mind, if you're planning on joining the LAG Confidential MLS fantasy league is that not all stats are created equal. This is especially true when it comes to assists, where the difference between an assist and not an assist can often be subjective, and second assists are limited to MLS.

Take as an example Mike Magee's first goal on Sunday. This is how the goal is diagrammed on Opta's chalkboard. 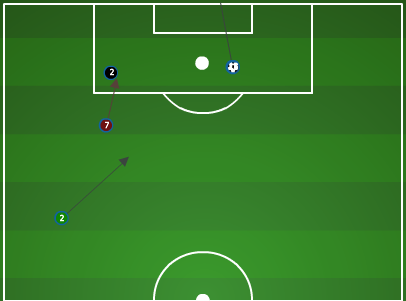 There's a Todd Dunivant pass up to Robbie Keane, then makes a run to Keane's outside (that's an interpretation of the data, what actually happened is Juninho sent a ball up, Dunivant was already up top according to the highlights). Keane's pass to Dunivant is unsuccessful, but Steven Kinney's attempt at a clearance is intercepted by Todd Dunivant. This causes a rainbow to fall to Mike Magee who volleys the ball in for a goal.

So then the question is, do you give Dunivant an assist. The Opta chalkboard doesn't. It calls Dunivant's action an interception and Magee's goal unassisted. The scorekeepers at The Home Depot Center initially agreed with this ruling, but then gave Dunivant the assist.

On a bang bang play like that, who got to the ball first can often become subjective. They honestly got to it at the same time and while Keane's pass does hit a defender, it's a 50/50 ball and it goes the way Dunivant wanted it to go. I'm fine with the press box's interpretation.

So what about MLS Fantasy? Todd Dunivant is one of four Galaxy players that make the dream team for this week. He gets a three point credit for his assist, as does his teammate Omar Gonzalez. As they both get a four point clean sheet credit, these offensively active defenders were great fantasy pickups.

Mike Magee, by the way, was the top fantasy point getter for the week with fifteen points for his three goals. Keane was one of the top two forwards, with a goal and an assist.

Now MLS Fantasy doesn't seem to give the second assist, as Graham Zusi only gets three points for one an assist despite being given a second assist on Sporting Kansas City's third goal. This means any fantasy players who picked up Michael Stephens hoping he might start and be a cheap pickup, wouldn't have gotten any assist points from him (he got the second assist on the Galaxy's fourth goal).

So it's important when checking a stat sheet, or an Opta chalkboard, or when playing MLS Fantasy, to realize that these are always someone's interpretation of events as they happened. The events are not always as clear cut as those gathering the stats would have you believe.