When I looked at the LA Galaxy's numbers from their match in Costa Rica, I noticed one glaring issue. Bruce Arena stated before the match that he'd play for a draw and he went out and did exactly that. In order to move on in the tournament, the Galaxy would have to come out the aggressor against Herediano in the second leg and they were able to do that successfully.

In that article I suggested the Galaxy come out with a lineup almost exactly like the one they came out with on Wednesday. Moving Magee back and Sean Franklin forward benching defensively minded Michael Stephens and struggling Hector Jimenez. Since both Magee and Franklin were already in the lineup, this would have the added benefit of allowing Leonardo and a young striker to play.

I assumed Jose Villarreal would need more time to fold back into the club after his time in Mexico, but I assumed wrong. Villarreal was chosen over Jack McBean and he played great scoring the team's second goal that ultimately became the match winner against Herediano.

CONCACAF Fantasy Stats: Time for Galaxy offense to step up 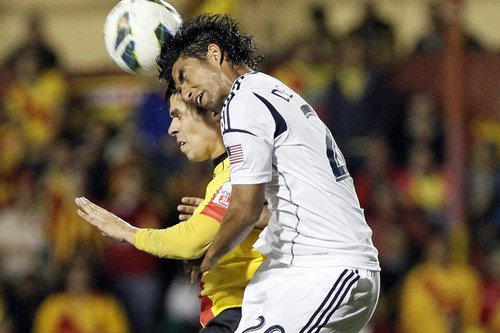 Looking at fantasy stats to see what the Galaxy needed to improve on.

In this latest chalkboard the hope is to see attacking bonuses to go along with the defensive bonuses the Galaxy tallied up in Costa Rica. Juninho had two successful crosses, both corner kicks, one that was an assist to Omar Gonzalez and the other a key pass that Gonzalez again got on the end of but the chance went high. For Juninho and Sarvas both, much less on the defensive side. There was a noticeable transition between the two matches from defensive midfielders to attacking midfielders.

The Galaxy managed seven shots on goal, and a key component in that is the number of attacking players successfully distributing the ball.

Getting a goal from a defender is an extra bonus, while three goals from three forwards is excellent as well. The Galaxy have Monterrey next in the tournament, but they get to carry this momentum against new look Chivas USA on Sunday.