The LA Galaxy has gotten good news the past few match days, with Seattle crash and burning. To get a sense of just how much things have changed in LA's favor recently I talked to Zach Slaton who crunches soccer numbers for Forbes.com.

Since MLS changed to a Wildcard playoff format last year, finishing in the top three of your conference has held more value than before. Sure more than half of MLS qualifies for the playoffs now, but four of those ten teams have to play an extra game. That the 2012 MLS Cup was then contested by two Wildcard teams throws a wrench in the importance of a top three finish, but should MLS stick to this format it'll likely become more important.

The LA Galaxy has gotten good news the past few match days, with Seattle crash and burning. With Seattle and Portland facing off this weekend, LA should have a jump in the standings in sight when they take the pitch again this upcoming Wednesday against Montreal. The predictive models currently have the Galaxy as one of four teams with greater than a 90% chance of making the playoffs, but how close are they to avoiding the Wildcard play-in game? To get a sense of just how much things have changed in LA's favor recently I talked to Zach Slaton who crunches soccer numbers for Forbes.com.

"As of today, the Galaxy have a nearly 50% chance of finishing in the Top Three, and thus avoiding the Knockout Round of the MLS playoffs. While Portland, Seattle, and LA all have played 31 matches, the Galaxy have a bit more difficult schedule remaining despite their two home matches to Seattle's one home match."

While the probability might be a coin flip, the difficulties lies in the slate between LA and Seattle. The mere fact that the discussion is no longer LA jumping Portland but LA jumping Seattle is significant. LA and Portland both have two home matches, and arguable Portland's slate is more difficult than LA's hosting Seattle and then Salt Lake.

Some of this discussion is moot until the Sounders and Timbers kick off on Sunday. Should the Sounders find a way to right the ship against Portland then the Timbers face a must win against RSL to stave off LA. If Portland snag all the points, the LA are battling Seattle for third.

Montreal shouldn't be taken lightly, but cross country matches (especially midweek ones) have less to do with form than one might think. The Earthquakes are certainly playoff hungry, but they are getting goals at the second worst clip in the Western Conference.

With so many of the top teams facing off in the final three weeks, there's high probability for mass chaos. It's nerve-racking for fans but does show the parity that MLS has prided itself on for some long.

"It will be truly fascinating to watch the run-in over the next two weeks. Each of the current top four teams in the West play another top four team during that time period - Seattle travels to Portland next weekend and hosts LA two weekends later, while Real Salt Lake travels to Portland a little over a week from now. Things are bound to get messy in the West given all of the interplay each team has with the others."

Say for example Portland beats Seattle and then Real Salt Lake beats Portland. If LA get the six points available to them in the next match week, they could see themselves in a tie for second place. The MLS EI model certainly thinks LA should be taken seriously in the next few weeks.

"The Galaxy will need to navigate some tough initial matches against Montreal and San Jose, but if they're able to do so they should find themselves with an opportunity to move into third or second when they get to the final match of the season against the Sounders. The top spot in the West is likely out of their hands - it's going to Seattle, Real Salt Lake, or Portland - but LA can earn a few days rest as they push towards their third straight MLS Cup."

So there you have it. Beat Montreal and San Jose. Suddenly a top three finish comes down to the final match of the year. Here's a look at the probable finishing positions as predicted by MLS EI, as up to date as possible. Seattle is still expected to finish first, but Sunday will ultimately decide what LA can do going forward. 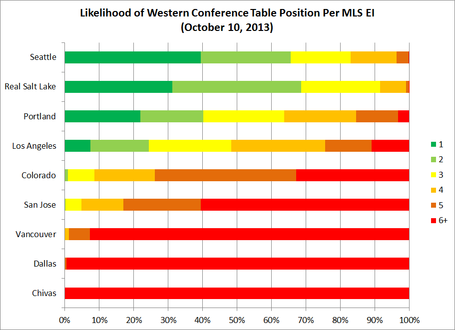