Fans who tuned in this morning to watch some EPL on Fox Soccer saw Tottenham draw 1-1 hosting Norwich City, then saw Manchester City hold on at home against spunky Queen's Park Rangers 3-1. In the space around the matches, the Fox Soccer EPL team talked about Clint Dempsey's transfer to Tottenham and all the other issues of the day. Fans may have noticed they did it from a newly renovated studio.

Studio 2A at the Fox Sports Network Center in Los Angeles is hub of the Fox Sports world. There's a 180 screen interactive digital wall that's supposed to enhance the pre-match, half-time, and post-match analysis Fox Soccer provides. It's the same studio MLB on Fox and NFL on Fox broadcast out of. 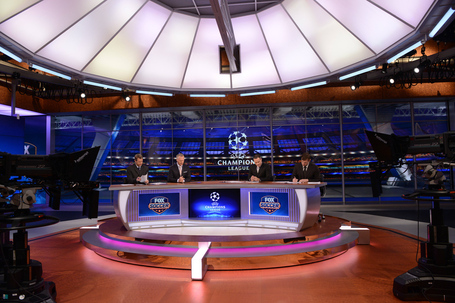 There are some drawbacks to Fox Soccer's system of simulcasting the Sky Sports produced international feed then turning it over to three guys watching from a studio in Los Angeles. The upside is the amount of content Fox Soccer is able to bring, but it does lack the personal touch that ESPN is able to give with fan interviews and the like.

What's your preference? Ian Darke as the man on the street or Rob Stone in a studio? What direction would you like to see MLS coverage go? Do you think MLS fans will ever get more than the quick ten minute intro currently given to national games?