The LA Galaxy met with President of the United States Barack Obama this afternoon inside the White House, then participated in a kick around with youth soccer players at First Lady Michelle Obama. The Galaxy presented the President with a silver MLS ball signed by the team, and a jersey with his name and the number 1. The MLS Cup was also on hand; the whole ceremony lasted about ten minutes. 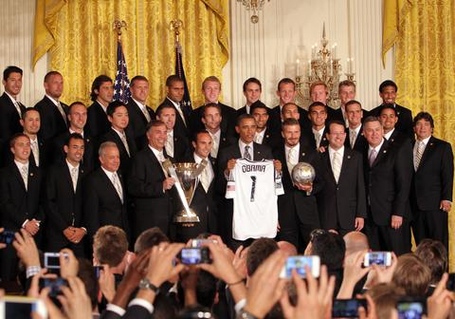 President Obama was in a jovial mode, beginning with praise for Robbie Keane. He mentioned that Keane scored within twenty minutes of his first Galaxy game, and is the all time leading scorer for the Irish National Team. He then spoke of David Beckham, admiring his ability to play through injuries. He also took the mickey out of Beckham a bit, saying "It's a rare man who can be that tough on the field, and have his own line of underwear".

He then spoke on Landon Donovan, saying he's done more for American soccer than just about anyone. He described the game winning goal in MLS Cup; Beckham to Keane to Donovan in the rain. He also congratulated Omar Gonzalez and A.J. DeLaGarza, who kept 17 shutouts and played their college ball not too far from the capitol at Maryland. He also spoke well of Bruce Arena and his ability as coach. 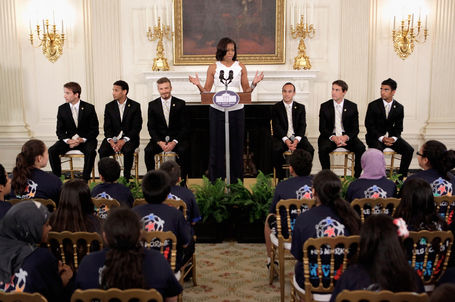 After the photo op with the gifts for the President, the Galaxy joined the First LAdy for a less formal event. David Beckham and Landon Donovan spoke, and Galaxy players mixed it up with youth soccer players. The team now flies back to Los Angeles to begin preparations for the weekend's match against Chivas USA.