This afternoon, the SB Nation MLS bloggers got together to conduct a mock version of the 2012 MLS SuperDraft. On the one hand, a group full of beat writers should better understand individual team needs than a national reporter. However, on the other hand, our rag tag group of local journos don't have their finger on the pulse of the college soccer scene. Still, we pressed on, trying to fill team holes with second hand information, youtube clips, and what we've seen in the streaming games from Florida.

While many draft boards out there in the webiverse try to rank talent more-so than trying to get inside the head of the different GMs, with the Mock Draft there was a concerned effort to try and think like Bruce Arena. Players who had trained with the Galaxy, or have ties to Kenny Arena and UCLA were valued over similar players at Virginia or North Carolina, for example.

That's why I went with Andy Rose with the first pick. He's trained with the Galaxy, and although he's listed as a midfielder, he's also played centerback in college. Those looking for a true holding midfielder or an attacking midfielder are going to pass over Rose, who may be one of the most talented defenders in the draft. If the Galaxy can get him and stick him with A.J. DeLaGarza while Omar Gonzalez heals, then moving DeLaGarza to right back when Gonzalez returns and Sean Franklin to a winger spot, it's likely the Galaxy could continue to churn along without missing a beat.

From the Combine player bios found in the MLS SuperDraft press kit, where Rose is ranked the 19th best prospect at the combine:

A product of English Championship side Bristol City’s youth teams, Rose is an imposing presence in central midfield, generally sitting in front of the back four. Best MLS comparison: Danny O’Rourk

Like O'Rourk, expect Rose to bounce around from center back to defensive mid, and like O'Rourk Rose is a highly touted young prospect, but hopefully Rose proves a more valuable asset and doesn't have the team hopping career O'Rourk has had. 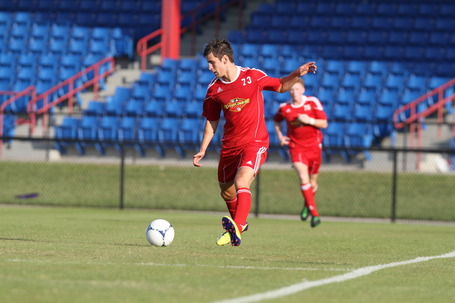 As for Yuri Gortenzvaig, all I know about him is he's a forward from Brazil. He's from Sao Paulo (isn't everyone) and came up through the Corinthians system. He was voted best player in the Nike 2012 SP Cup, and is characterized as having a European style, physical and a good finisher. I imagine a much more talented version of Adam Cristman, which could be fun to watch up top with Robbie Keane.

So have y'all done any reading ahead of the 2012 SuperDraft. Do you have a particular prospect you want the Galaxy to go after? What do you think about Andy Rose and Yuri Gortenzvaig?