Keane Scored Two Goals, I'll Believe That Til I Die

Share All sharing options for: Keane Scored Two Goals, I'll Believe That Til I Die

Perhaps I should wait til I calm down emotionally to write the recap. No. Robbie Keane scored two goals tonight, and had his brace disallowed by a head ref in no position to make the call. Josh Saunders grew spaghetti arms at the end there, but I will never ever write the words "Galaxy" and "lost to Morelia in Mexico" in the same sentence.

This is the photo that's been floating around: 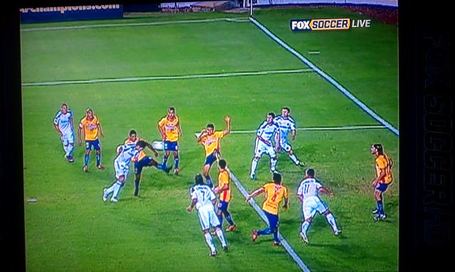 Captured by the managing editor at Dynamo Theory, you can clearly see the ball in play, and Robbie Keane so onside he could have written a book called, "Being onside and how it can help you score a goal". The rebound fell right in front of him, and he knocked it in.

What else is there to say? The first Morelia goal was due to shaky keeping from Josh Saunders. Did it cross the line? There could be essays written on the subject. Point is Saunders should have never made it that close. And then the "go ahead goal". A fine header, but again Saunders could have been in better position.

Mostly, anger. You could read Bruce Arena's lips, as he called this game buffalo chips, and perhaps that's all that needs to be said. That Hollywood ending was scripted, and that's unfortunate to say the least.