Share All sharing options for: Los Angeles Soccer in Cascadia: A History

Hey all. It's been a while since I've done one of my LA soccer history posts. You know what they say, one doesn't know the story until they know the hi-story : ) Perhaps they don't say that.

Anyhow, today we start by looking at the 1980 Portland Timbers, who were in the Rose Bowl playing the local soccer club: the LA Aztecs. 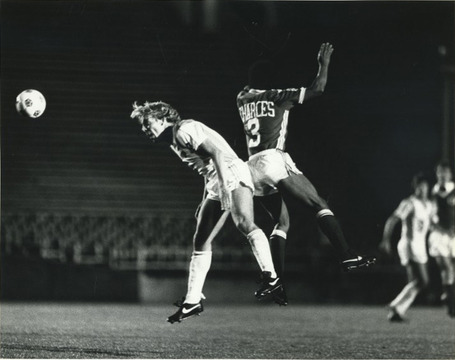 The photo is fairly dark, so it didn't lend itself to a colorization. Night soccer in a well below capacity Rose Bowl, at least the Los Angeles Galaxy never had to suffer that indignity ; )

Number three for the Portland Timbers is Clive Charles. Unlike some of the English footballers that have been featured in my historical posts, Clive was a more average player. He started with West Ham, made 77 appearances for Cardiff City, then 67 appearances with the Portland Timbers. He even stayed with the Timbers when they became an indoor team, scoring 7 goals in 9 appearances (because indoor soccer is a joke, and how it became the top league in America for a decade is beyond me). His last two seasons were spent with the LA Lazers, who played at the Great Western Forum and had low budget laser shows before each match.

For the Aztecs that's Thomas Rongen. You may know him better as the coach of the US Men's U-20 soccer team (you know, that one that failed to qualify for the World Cup) and Sporting Director of Chivas USA (whatever that means). The Dutchman spend four years with Ajax without making an appearance, then spent two years with the LA Aztecs, leaving when the Aztecs tried (and failed) to become an indoor team. The midfielder managed six goals in his two years in LA.

As a bonus, here's the LA Aztecs hosting another Cascadian heritage team, the Vancouver Whitecaps. 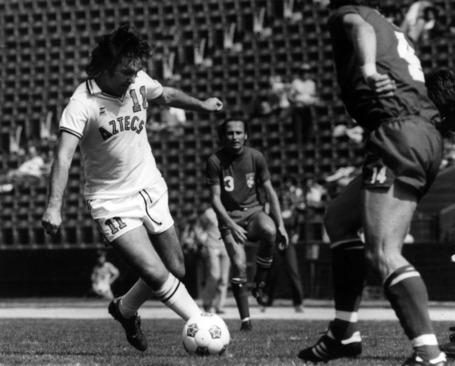 This photo is from 77, in the LA Coliseum this time. Brian Bason is the foremost Whitecaps player, with defender Bruce Wilson in the background. Bason came up with Chelsea and scored three goals for the Whitecaps, while Bruce Wilson is a Canadian native. Canadian soccer fans might remember his as the captain of the 1986 World Cup, the only WC Canada has appeared in. He was on CONCACAF's Team of the Century, the only Canadian to make the honorary squad.

It's really quite the shot, with Canada's most famous footballer in the background center, and George Best the focus of the shot. The David Beckham of his day, he scored 27 goals for the Aztecs in two separate stints, and 137 goals for some club named Manchester United.