Let me explain my key terms. Robbie Keane is an Irish footballer, scored a bunch of goals, just signed with the LA Galaxy. Presser is a fun UK way of saying press conference, and today Keane got to meet the local media for the first time; as well as some folks from back home. Now The Crack, sometimes spelled Craic, is an Irish term for fun, enjoyment, and enjoyable conversation. Think of it as in "crack a joke" or "wise-crack"

When I sat down with my complimentary pint of Guinness, I thought, well this is brilliant. As I helped myself to corned beef, cabbage, and boiled potatoes, I thought, this is the crack. Truthfully that's the atmosphere the LA Galaxy attempted to cultivate this afternoon. If David Beckham's arrival was handled with British pomp and circumstance, Robbie Keane's arrival could've taken place in one of Dublin's pubs.

The Confidential took some Super 8 newsreel footage of the players being introduced, including Robbie Keane for the first time:

The respective higher ups were there, but everyone was in the best of spirits. Tim Leiweke spoke about the acquisition, and had the most bombastic one liner of the afternoon, when asked about other teams not liking the LA Galaxy having so many DPs:

"My message to the rest of the league is, if you don't like it then go get your own."

The Irish consulate general also came and granted Robbie Keane with a special pen. He confirmed something that many suspected, that Keane's visa had been expedited. Earlier in the week, the media had to admit they had no idea when Keane's visa would be approved. Keane said during the conference that it all happened very quickly, in the span of seven days. So kudos to the Irish Embassy in Los Angeles for getting that done so quickly. The consulate General also cracked that Robbie Keane had a better international goal average than Diego Maradona, and that "Robbie never used his hand". 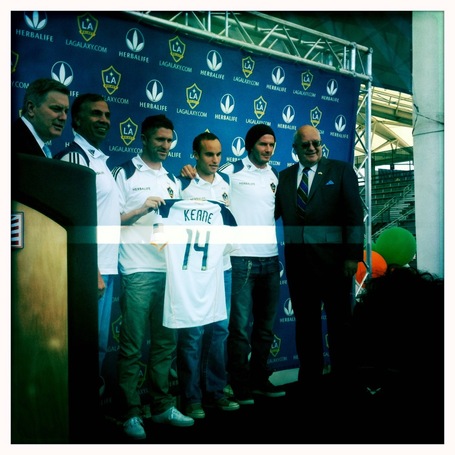 Once we got to Robbie, Bruce, Landon, and David, we got the comments we were expecting. Bruce said that "Robbie will play extended minutes tomorrow" but he wants to be smart about it. Robbie said he felt good at his first practice, that he liked the atmosphere of the locker room. As far as getting the Galaxy strategy down, he plans on just diving into it.

David was cracking jokes left and right. When asked if he helped talk Robbie into coming to MLS, he said "No, because that would have been illegal." When asked if he was excited about the new target, he said "Well I have lots of targets, getting the most yellow cards". He was nothing but complimentary toward Keane, "Robbie scores goals, and he's a great teammate. Plus everybody loves the Irish."

Robbie said he's got a couple of friends on the Red Bulls, so he's looking forward to playing them next week. He also said he got to sample some MLS competition while at Tottenham, so he knows about the physicality and the level of play in the league.

When they first sat down, Landon Donovan put his arm around Robbie and gave him a playful shake in response to some of the praise he was getting. That small moment made me tremendously excited to see these guys play together on the field. Landon looks good in the welcome wagon role. It's his club, he's the captain, and Bruce has brought in some great players for him to play with.