Share All sharing options for: Galaxy Look To Extend Streak

The most important thing for the Los Angeles Galaxy tonight, is just how many of their players will have mended in time for kickoff. David Beckham, Omar Gonzalez, AJ DeLaGarza, and to a lesser extent Frenkie Hejduk are all questionable for tonight's match against the Chicago Fire. The parking lots are open at the Home Depot Center, and the fans have begun to trickle in.

Historical photo of the match: 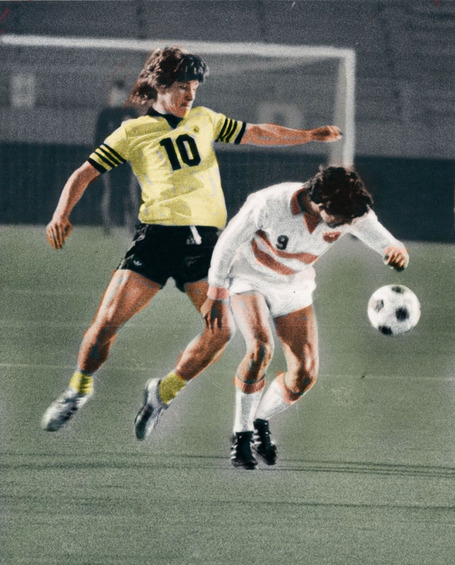 Tonight's historical colorization comes from 1975. The Los Angeles Aztecs are taking on the Chicago Sting in Chicago. Number 10 for Chicago is Gordon Hill, English midfielder on loan from Millwall. Gordon Hill would be named all league, and return to England to sign with Manchester United. He's an example of something we haven't seen too much of in MLS, young English players coming to MLS on loan. One can assume that's because MLS teams don't want to spend DP money for a loaner. For Los Angeles that's Uruguayan midfielder Uri Banhoffer. He lead the Aztecs in goals that year with 14.