It's not hard to sum up the match between the Los Angeles Galaxy and Manchester City FC. It really takes just one word: competitive. It was a match that inspired the crowd to be loud, the players to show off, and most importantly, it took a meaningless game and made it fun.

Before the match started, both teams were showing off the trophies they won last year. Of course, in both cases, the trophy won is the second most prestigious domestic trophy a team could win. Of course, the FA Cup with it's 139 year history commands a bit more respect than the Supporter's Shield, and the respective lines for photographs reflected just that. 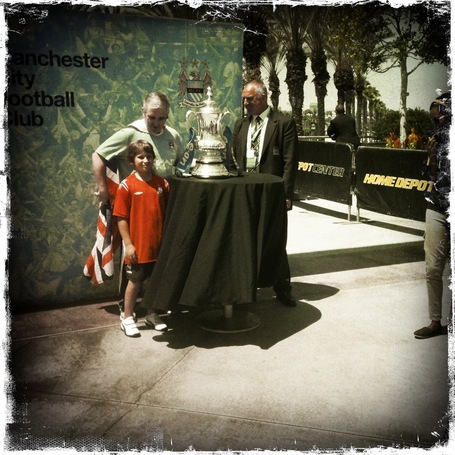 The FA Cup in all it's Glory.

I like how the English drape their trophies with ribbon in the winning team's color. The cup just looks cool, regal almost, even with the base still attached.

Then it was onto the match. There aren't many day matches at Home Depot Center. While it's probably easiest to sell out Saturday night, the daytime atmosphere just screams football to me. And I use that term universally. It reminds me of college football at my alma mater Cal, it reminds me of watching EPL teams play on Saturday afternoons.

The ACBrigade got in two particularly good chants. There was "You'll Never Be United" from the David Beckham quote. This started up just after Manchester City were awarded a controversial penalty. The British press said there was no doubt that Micah got hacked down, but there was some doubt from the local press on the replay. Anyhow, Mario Balotelli stepped up, stutter stepped, and faked Josh Saunders out of his shoes. The Manchester City fans (who were really confined to the away corner, at least the vocal ones) let out a nice cheer, and the ACB came right back at them, and loudly.

Roberto Mancini pulled Balotelli out right away, and after the match said it was because he made a mistake; that what he did wasn't professional and wasn't serious. He wouldn't tell the press what was said between him and his striker, saying it is hard to translate from Italian, but it's fair to guess it wasn't too polite.

Of course, in the second half the Galaxy played much better, including Mike Magee's equalizer. Magee took it on a Volley from a Chris Birchall possession saving header. Bruce Arena said he thought it had a chance of being on goal as soon as it left Magee's foot. Joe Hart made a backwards diving save attempt, but the ball dipped into the far corner. The crowd was loud, and the Galaxy responded with a few more minutes of possession and good attempts on goal.

Arena was also happy to get some of the younger and supplemental players into the mix. Kyle Davies, who has tons of talent but hasn't found his comfort zone yet, started the match. He, of course, came over as a replacement for Leonardo who went out with a season ending injury. Hector Jiminez also started, Dustin McCarty got time on the pitch, homegrown player Jack McBean who was on the US U-17 team this past World Cup got to play, Daniel Keat international who the Galaxy got in the supplemental draft made the pitch again.

With such an impacted schedule (more on that tomorrow) the Galaxy are going to need this young depth to step up and make contributions down the road. June was really rough with the friendly tournament and the US Open Cup, but August doesn't get any better with CONCACAF Champion's League group play kicking off. For the Galaxy, that's going to involve international travel while trying to hold onto their slim lead atop the MLS.

The Galaxy don't need to finish top of the table. At this point, the team's priorities need to be making it out of group stages and making the MLS playoffs. Last year is a prime example that playoff seeding is largely irrelevant. Even if it costs a few points, rest players when you can, get people healthy and in form and make the push in a few months.

This week is the MLS All-Star game. Omar Gonzalez and Landon Donovan were both selected in the first XI but will not be playing in the game due to their injuries. David Beckham will be speaking on behalf of MLS at tomorrow's press conference, so he's likely to see a good amount of time, and Sean Franklin is still on the hook for gameday. As much as I love a meaningless friendly, let's hope Franklin hangs back.