As a child I was taught to make new friends, but keep the old. That one was silver and the other gold. Now that the (much maligned) gold friendly is over, it's time to meet our new friends Manchester City. Everything I learned about Man City I learned from this man: 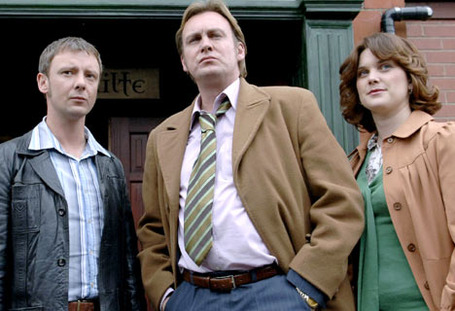 That, my friends, is Gene Hunt, fictional character from the BBC series Life on Mars. Who better to teach us about an English club than a fictional character from an English TV programme. Now, the premise behind Life on Mars was that Sam Tyler, left, was a modern day cop who was sent back to 1973 after being hit by a car. Sam has to figure out what the heck he's doing there, but in the meantime solves crimes as a #2 to the man in the center, Gene Hunt.

The show is set in Manchester, and in the fifth episode of the first series, they find a man stabbed to death, wearing a Manchester United scarf:

Gene Hunt: United. Well, whoever did it - at least he had a decent motive.

Man City won the Charity shield matchup in '68 over FA Cup winner West Brom, to the tun of 6-1. City got to play in the Charity Shield in 1972, despite Derby County and Leeds United winning the league and the cup respectively. This was the peak of the Brian Clough rivalry with Leeds, chronicled in movie/book The Damned United. So the '72 Shield was an invitation event, and City defeated Aston Villa to win their third charity shield.

City even managed to win the European Cup in 1970. Meanwhile, rivals Man United won the league and a European cup in '67, and then were largely irrelevant for most of Man City's glory years. After this, well, Man City went into a bit of a decline. Anyone who's seen a match in Old Trafford has seen the banner marking the number of years since City's last trophy.

At the beginning of 2011, that sign was up to 34 years. Robert Mancini, City's current manager, was hired in 2009. And on January 6th, 2010 Mancini told Sir Alex Ferguson, that City will be tearing that Old Trafford banner down. It took him another year, but Mancini made good on his promise, winning the FA Cup and restoring glory to Manchester City, defeating Manchester United in the Semi-Final.

While Mancini deserves a lot of credit as Manager, most of City's revival can be traced back to their new ownership, HH Sheikh Mansour bin Zayed Al Nahyan. This United Arab Emerati politician bought Man City in 2008 and has been pouring oil money into the club ever since.

With the Shiekh's money, Mancini went out in the 2010 transfer window and stockpiled talent like he was stocking a bomb shelter. Her signed German international defender Jerome Boateng from Hamburg for approximately £10.64m, Spanish World Cup winner David Silva from Valencia for approximately £24m, Yaya Toure from Barcelona for around £24m and Aleksandar Kolarov from Lazio for approximately £19m.

Mancini plays a very defensive style, and is known for publicly embracing the 1-0 victory. While City may be losing it's star striker Carlos Tevez, Mancini's style tends to be holding and holding, getting the one brilliant goal, then going back to holding. City's victories in the FA Cup Semi-final and Final were both 1-0. Allowing City the opening goal is almost the kiss of death.

City will likely rest Yaya Toure in the match against the LA Galaxy, as Toure suffered an injury on the choppy pitch in Vancouver. While the Galaxy certainly stand a better chance against City than they did against Real Madrid, this is an up and coming team and a deadly one when they play their game.