Share All sharing options for: Galaxy Week in Review: The Lost Diadem

The Galaxy had two matches this week: one in Tukwila, Washington, and the other in the Los Angeles Memorial Coliseum. In a week with no MLS matches scheduled, the Galaxy went 0-2. In Tukwila, they lost to the Seattle Sounders, knocking them out in the quaterfinals of the 2011 Lamar Hunt US Open Cup. On Saturday, they played an international friendly in the Los Angeles Memorial Coliseum against Real Madrid as part of the World Football Challenge.

The Galaxy are out of the US Open Cup, but the World Football Challenge marches on. By virtue of Adam Cristman's goal, the Galaxy have earned 1 point for the MLS West in the standings. Under the WFC rules, teams get the normal 3 points for a win, 0 points for a loss, as well as 2 for a PK win and 1 for a PK loss.

If that weren't weird and confusing enough, teams also earn up to three points for each goal they score. Which is why Manchester United and Real Madrid currently sit atop the "table" with 6 points, despite only playing one match. Manchester City has 5, and MLS East has 1 thanks to the New England Revolution Penalty Kick against United. Club America have no points, while Guadalajara, Barcelona, and Juventus have yet to play. If there's a trophy for this competition, LAG Confidential hasn't seen it, but here's the trophy from 2009: 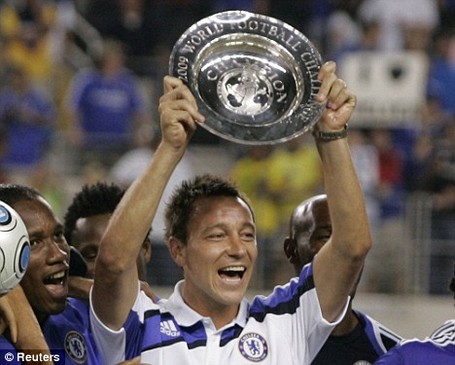 Not that the World Football Challenge is the only off-season (for the European Clubs) tournament with a meaningless trophy. This Daily Mail article talks about the Asia Cup and Wembley Cup, though the 2010 World Cup may have killed those like they almost killed the WFC. Seeing as how MLS teams were not involved in the 2009 WFC, and the WFC currently has their home page on MLS.com, it's highly likely this is a Don Garber production.

That was a bit of a screed, let's get back to the Galaxy.

Galaxy Man of the Week: Adam Cristman. The Galaxy scored two goals this week and both were scored by Cristman. The forward has had a good showing in reserve matches, and with the Galaxy looking for solutions up front, Cristman might get an extended look going forward.

Galaxy Defender of the Week: Bryan Jordan. The Galaxy's utility player, he mostly gets this for having to mark Cristiano Ronaldo (which he also memorably did last year), but also belatedly for his match against Chicago, when he was responsible for marking Patrick Nyarko. Tough assignment for the kid, and thought it deserved recognition that he didn't look foolish (or Jonathan Bornstein in the vernacular) out there.

Disciplinary Summary: Chris Birchall, suspended for 7/20 vs. Columbus and 7/30 vs. Vancouver due to Disciplinary committee action.

Upcoming Week: The Galaxy host the Columbus Crew on Wednesday at 7:30 in an MLS matchup, then host Manchester City FC on Sunday at 1:00 in their last match of the World Football Classic.