At 3:10 yours truly was standing outside the Rose Bowl gates with Grant Wahl of SI and Scott French of ESPN, wondering why they hadn't opened the gates for reporters at 3:00 like they said they were going to. We were standing in front of the handicap entrance to Gate G (the makeshift press entrance) while a line a half a mile long of Mexican team supporters stood single file waiting to get into the main gate next to us. Out of nowhere, a US national team flash mob appeared and started chanting "Dos a Cero" 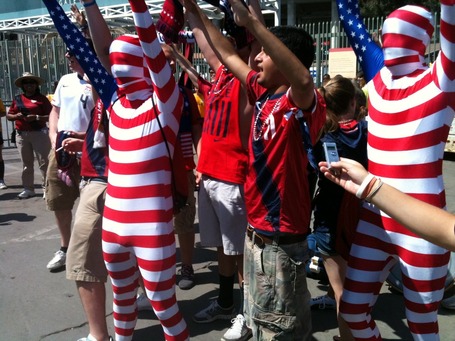 A pleasant distraction. And a fine example of how the entire day felt. The Rose Bowl Mexico territory, and those supporting the host country were forced to act like uppity away fans. Finally the press was let in, get settled in my seat, gorgeous view of the whole pitch. 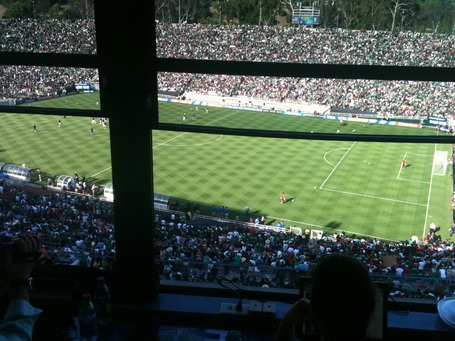 Fire up the old laptop, look at what's happening on twitter. This is when I read that Mike Magee is in goal. What? Mike Magee is in goal? I run up to the monitors to see what's happening, it's just before halftime and Bruce Arena looks livid. It's a look I'll see again today. Finally I get the scoop. Donovan Ricketts was injured Josh Saunders was red carded. We all said the same thing. We just wanted to see the Galaxy hold the shutout. However, we had to get down to the press conference with Chuck Blazer.

Blazer managed to say absolutely nothing. He wasn't happy because he had managed to survive the attack on his job, he was happy to see the sport grow. He did his job yesterday, he'll do his job today, and he hopes to do his job tomorrow.

Blowing off Chuck Blazer to watch the rest of the Galaxy match, I see that Magee has made saves. Magee has been brilliant under the circumstances. Magee is trending on twitter! Can't express how pleased I was when that whistle was blown and the Galaxy got out of San Jose with a point, down to ten men, and with only one shot on goal.

Now it was time for the final everyone had been waiting for. The Mexican national anthem was loud. The Star Spangled banned was listened to. Then came the two coolest goal I had seen up to that point.

Freddy Adu took the corner kick. The moment I saw that it was Freddy Adu and not Landon Donovan, I knew. This one is going in. The reason I knew is that Bob Bradley comes out with something completely new every match, and the opponent has about half an hour of "what on earth are they doing?" and especially on set pieces, this is where the Americans can get really early goals. Adu went near post, Michael Bradley knocked it in. 1-0 USA.

Adu was also crucial on the second goal, Adu held it in midfield, found Clint Dempsey in dead center, Landon Donovan made a brilliant run along the offside line then dribbled Alfredo Talavera out of position and smashed it in. As Alexi Lalas said, it was something more than heaven. And the no cheering rule in the press box, well that sort of went out the window (not me, I put on a stupid grin but I did not cheer).

Adu deserves all the credit for those goals, but it's what he did to get them (and the fact that he refers to himself in the third person) that really makes me think he's a one half player. He's a ball hog. He wouldn't give up the ball in the middle, which was great when someone else got free but horrible when he wasn't looking for that free man. A midfielder needs to be able to hold the ball in the middle, but he has to still watch the play develop.

After that little bit of awesomeness, Mexico went from "what on earth are they doing?" to "hey, Jonathan Bornstein came in for Steve Cherundolo, let's abuse him for the rest of the match". Three of the four Mexico goals can be directly attributed to Bornstein not marking his man. The final score was 4-2, but the Americans looked punched in the fact going in at halftime drawn. The Mexicans figured out Bob Bradley's changes. Tim Howard, looked as angry as Bruce Arena did earlier in the day.

It was a hot day, and crazy day, and as evidenced by the arrest record, a drunken day. Many of my friends had beer spilled on them, which is crazy since they were charging $20 for 40 ounces. However, from my shaded, air conditioned spot in the press box, it was the most interesting sports spectacle I'd ever witnessed.