Lot's of little bits and pieces to talk about before we get into the clippings today. MLS announced the matches that will be broadcast nationally as part of the First Kick weekend. The schedule is as follows:

If you're Canadian, you can watch -

But if you're not in the Queen's Country, kickoff starts on Sunday, March 11th.

Congratulations Timbers, you're the new Sounders. Wear it well.

MLS also unveiled the new match ball for next year. Rumors that the Galaxy were going to use a silver version at home all next season have not been confirmed 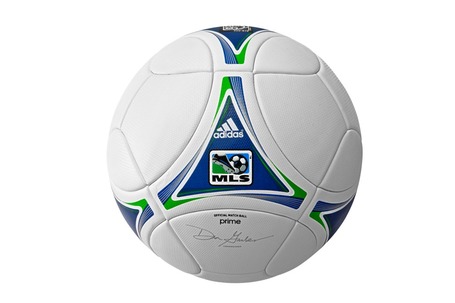 It's called the Adidas Prime, and replaces the Jabulani that was force fed to MLS after Adidas had a bunch of balls left over from World Cup 2010. This ball was designed specifically for MLS, and not only are the colors MLS's official colors, but the stripes are supposed to invoke the MLS Cup. This is a solid win for Adidas.

"We worked directly with both field players and goalies to rigorously develop a ball with the truest and most stable flight path," said Ernesto Bruce, MLS manager for adidas.

So, now, let's see what the papers have been saying about the LA Galaxy:

NICK GREEN on SOCCER: There's no offseason for Chivas, Galaxy - LA Daily News
Major League Soccer has more clubs, players and options than ever for all concerned in what is the shortest and busiest offseason in history.

GALAXY: L.A. finishes on the spot - Soccer Blog - ESPN Los Angeles
Now we're left to wait, a few weeks probably, before we learn whether David Beckham will return to the Galaxy, a decision he says he'll make durin

GALAXY: Keeping up with Becks - Soccer Blog - ESPN Los Angeles
It's all Becks all the time around Melbourne, where the Galaxy are readying for the final game on their postseason tour of Asia and Australia. There