If you buy something from an SB Nation link, Vox Media may earn a commission. See our ethics statement.

Share All sharing options for: MLS Cup 2011: Need A Ticket? 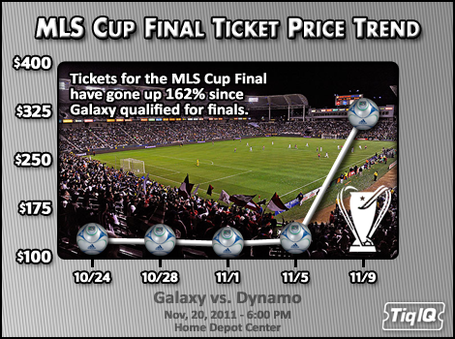 So you or someone you know waited until after the Galaxy beat Real Salt Lake Sunday night to buy tickets to MLS Cup. I'll spare you the lectures and self-indignant comments, let's just get you inside the stadium.

If you're one of those fans upset over not being able to buy a ticket but know in your heart you'll pay what is necessary to see the game in person, do yourself a favor, bite the bullet and buy a ticket on TiqIQ. The closer it gets to Nov. 20th, the higher the demand and the scarcer tickets become. Prices are rising, and quickly; Morning morning the cheapest ticket on Stubhub was $58, yesterday it was $83, and on Wedneday evening, $99. (Edit: now $109)

Especially for LA fans, the opportunity cost of watching the Galaxy play at home for the Anschutz Trophy in what could very well be the most festive atmosphere ever for a Galaxy game at the Home Depot Center is unparalleled. Winning the cup would be a fitting tribute to David Beckham, which might be his last game in a Galaxy uniform.

But let's say you don't want to pay ridiculous prices for MLS Cup tickets, which means you're either a college student or a cheapskate.

You have two narrowly feasible options. The first is to visit the Galaxy website and sign up to get on the waiting list for standing room only tickets. Because of the sudden demand for tickets and the short timeframe the Galaxy have to accommodate that demand, filling the stadium beyond capacity becomes problematic. Far from a contigency plan, releasing standing room only tickets and other last minute proposals to increase capacity have not been finalized yet.

And from what I hear, that list is filling up quickly, so I wouldn't hesitate to fill out the form.

The second option is to pursue promotional offers. A Visa Signature card offer was available for a few days before quickly selling out.

And then there's this super duper creepy Craigslist ad.

And then there's always this. 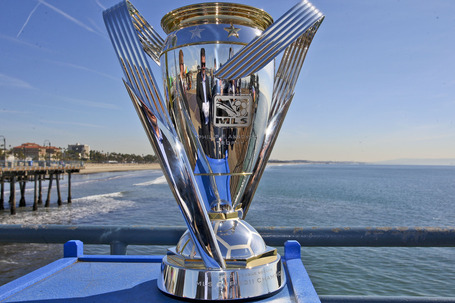