MLS Cup 2011: Getting Dirty In Carson

Share All sharing options for: MLS Cup 2011: Getting Dirty In Carson

On a sunny Thursday afternoon, volunteers and MLS players got together to make Veteran's Park in Carson, CA a more beautiful place for children to enjoy. MLS W.O.R.K.S. teamed up with the Home Depot to refurbish areas of the park that were looking a little run-down. 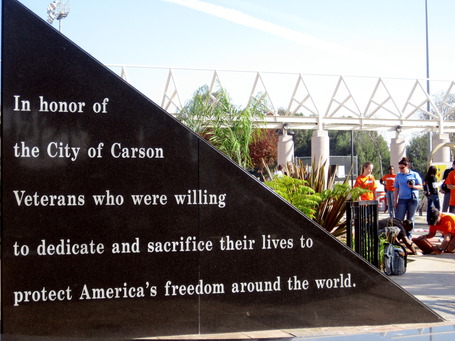 There were two main areas that were being fixed up, a flower bed by the front of the park, and a memorial near the playground area. Volunteers from the Home Depot worked in the morning, and in the afternoon, six MLS players showed up to put on the finishing touches. 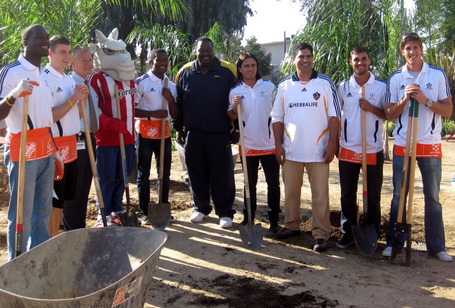 The players were CJ Sapong, Chris Wondolowski, Zak Boggs, Mauro Rosales, Michael Lahoud and Andrew Boyens. Oh, and the Chivas USA mascot showed up too. MLS was widely represented at the event--Sporting Kansas City, San Jose Earthquakes, New England Revolution, Seattle Sounders and Chivas--and guess what? Off the field, all these guys get along just great! 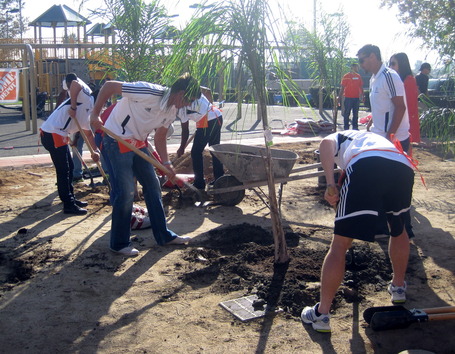 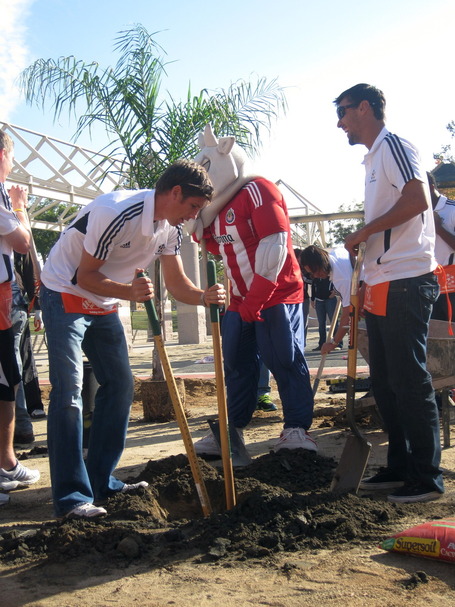 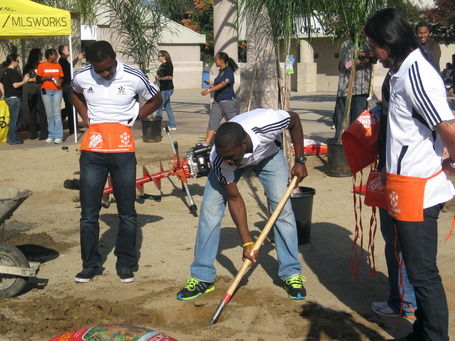 Along with the refurbishments, there were also soccer clinics going on, run by members of the LA Galaxy coaching staff. The kids all seemed to be having a blast learning skills and playing in scrimmages. 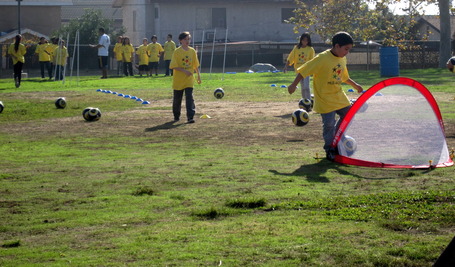 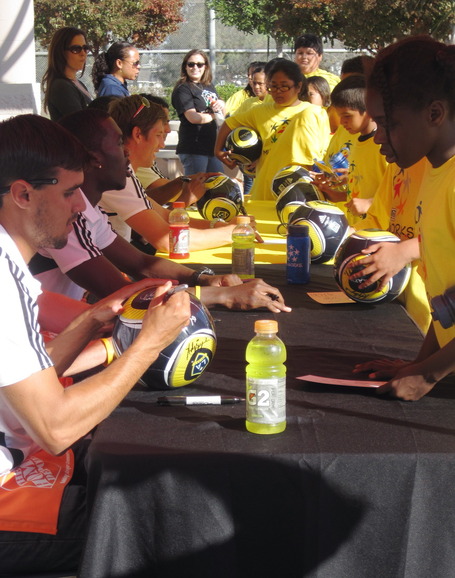 The players signing soccer balls for all the kids. One even asked Wondolowski if he was David Beckham. Wondo said no, but I think he should have run with it. 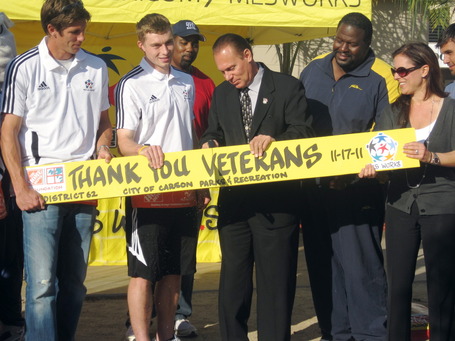 The Mayor of Carson, instead of cutting a ribbon, sawed through the ceremonial board. Clever.

I had a chance to chat with a few of the players after they had finished planting trees and flowers, and signing autographs for at least 100 kids. CJ Sapong explained that events like these are important to help kids and the cities they live in.

We're trying to freshen up the community a little bit. They were telling us that some schools around here don't have a lot of facilities and ways to do physical things on their campus, so this is the area where they come and have recess and play around.

Chris Wondolowski said that not only do these events mean a lot to the people who live here, but it's a great opportunity for them as players to reach out.

It's important for us because we get to relate with the community, get to meet them and get involved with it. Any time we can give back, it's a positive thing. And it's a good thing for them too, because they get to come out, get to meet us and hopefully we inspire them to play soccer.

Zak Boggs also added that when you spruce things up, and give the kids a nice environment to play in, that breeds positive attitudes and outlooks in the children.

Overall the event was a huge success. Once we were done talking about what was happening at Veterans Park, I took the chance to grill the guys about happenings in the world of MLS, and beyond.

As you probably know, CJ Sapong was named MLS Rookie of the Year, so I had to ask the award-winner how the recognition felt.

Feels great, it's been a long road coming. I've been working really hard. Also, I think it shows a lot about our team, they made me look good throughout the year. We started of kind of rock, but we stayed true to ourselves and our identity in the locker room, and turned it all around. That award reflects the hard work we put in throughout the season.

How selfless of you CJ, essentially saying this was as much yours as it was the team's. Give yourself a bit of credit, you earned it!

Before I let him off the hook that easily, I had to ask about Hope Solo. As I'm sure we've all seen, Sapong wrote a rap for Solo, and sang it to her while it was recorded. It was quite the stunt. This season, Solo was on Dancing With The Stars. I assumed Sapong had been watching, but I had to find out for sure.

Yes, I did watch. I was actually trying to get out there, she had invited me to one of her performances, but with the schedule I wasn't able to go. But I was definitely there rooting her on, getting all of Virginia and all of KC to vote for her.

He was bummed she was voted off this week, but applauded how far she make it--final four! He credited her competitive nature, and her determination for getting her so far on the show.

Zak Boggs plays for the Revs. With all of the shake-ups going on in New England, I tried to get a sense of how the team was feeling about it.

As anybody on the team will probably tell you, it's good to have some new life in there and hopefully some positive changes. It is what we make it. We're going to be positive and move forward.

Basically, he said, "I'm going to be nice and police so I don't stir up any trouble." Smart guy.

Wondolowski, who if you didn't know, plays for the SJ Earthquakes. So, naturally I had to ask him about next season. With the unbalanced schedule, LA will certainly be seeing much more of the Quakes.

I think it's going to play into the rivalry big time, it's a red hot rivalry. I know the fans get into it, I know the teams always have a battle, it's usually a close game. My guess is we'll probably play those guys [Galaxy] as much as possible.

When asked how the Galaxy fans treat him at the HDC, Wondo was cautious, but honest.

They treat me as they should; they're great and accommodating, but they want their team to win. They'll voice their opinion, as they should, but I don't think I'm high on their list, so I have no problem with them. It's all in good love and they're not over the top.

Galaxy fans, that was way too nice of an answer from him. He didn't even seem scared! Maybe next season we'll have to strike a little bit of fear into him, what do you say?