Kayla got us started last Wednesday, with coverage of the MLS Cup's arrival at the Santa Monica Pier. The MLS Cup has continued it's journey throughout Los Angeles, visiting the LA King's Anze Kopitar; UCLA soccer coaches Jorge Salcedo and Kenny Arena; and today Brooke Anderson and Kevin Frazier on the set of the TV show The Insider which is apparently a TV show.

Bruce Arena and Todd Dunivant talked about the match with the media today, answering questions. Bruce Arena confirmed what we heard this morning, that he spoke to Ireland coach Trapattoni about Robbie Keane returning to the Galaxy, but Keane decided to stay. "Hopefully his minutes will be limited", Arena said. 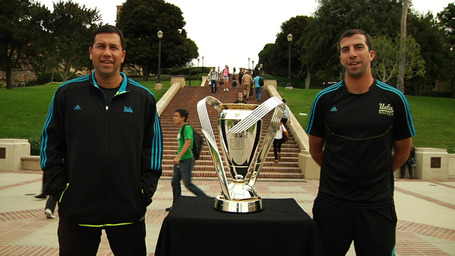 Two Sundays ago, after winning the Western Conference final, Arena admitted that there was pressure on the Galaxy to make the Cup after it was announced the event would be held in Los Angeles. When asked what kind of pressure the team is feeling now, Arena said, "I think it's good pressure, I think it's the kind of pressure you're used to as an athlete."

Certainly the Galaxy couldn't ask for more comfortable environs. They'll be able to stay at home while Houston will fly in on Thursday. They'll have a home crowd on their side. Not that it means the Galaxy are taking this one lightly. "Maybe we’ll have the crowd on our side, but we saw that doesn’t stop Houston from winning when they defeated Kansas City," said Galaxy midfielder Juninho. "So we must be well-prepared and in our best form going into this big game." 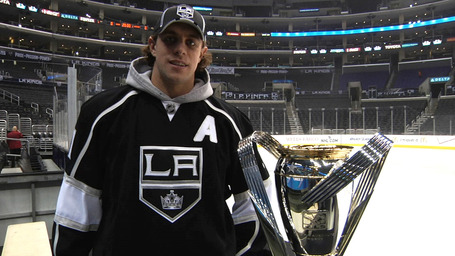 Bruce Arena was asked about Todd Dunivant, who qualified for the Defender of the Year award and made the MLS Best XI. "From our end, Todd has had a very consistant year from start to finish. I've had him for three or four years of his MLS career and for me, this is the best he's played."

It was announced this morning that Bruce Arena won Coach of the Year. He was up against Sigi Schmid, who guided the Sounders to third straight US Open Cup and another playoff berth, and Peter Vermes who guided Sporting Kansas City to the top of the Eastern Conference despite playing their first ten games on the road. Arena was modest saying "This is an award for our entire organization" 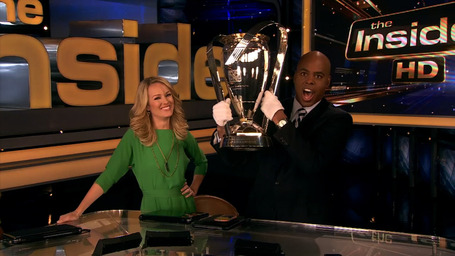 The Cup costs carries a six figure price tag and was designed by Tiffany's. You can see as the pictures progress that they started requiring those handling the Cup to wear white gloves to keep fingerprints off the trophy. Supposedly the Cup is on the set of Jimmy Kimmel Live tonight.
My favorite part about the Cup? That it now has a prominent star etched on the front of it. The kind of stars teams put above their crest on their jersey. The third such star for the Galaxy if everything goes right on Sunday.