It's official: the MLS Cup frenzy has descended upon Los Angeles. Ten days of public events kicked off today at the Santa Monica Pier with the Trophy Arrival Celebration. The MLS Cup was escorted onto the pier by MLS legends and former LA Galaxy players Alexi Lalas and Mauricio Cienfuegos...and two blond trophy models. Their purpose, other than making the cup look sexier than it already does, has yet to be determined. But I digress. Here is the Cup with Lalas, Cienfuegos, and the ladies as it was driven onto the pier. 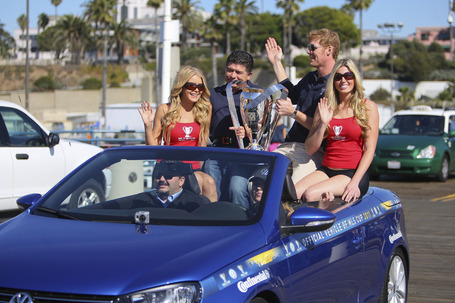 Once the Cup was safely placed on a stand in front of the ferris wheel, Lalas and Cienfuegos both made brief remarks and then posed for more photos with the Cup; and of course the models. Fans were able to take pictures with the Cup too, a cool moment for any MLS fan. Even those whose team didn't make it to the final--yes, I'm talking about at you, New York Red Bulls fan who showed up. 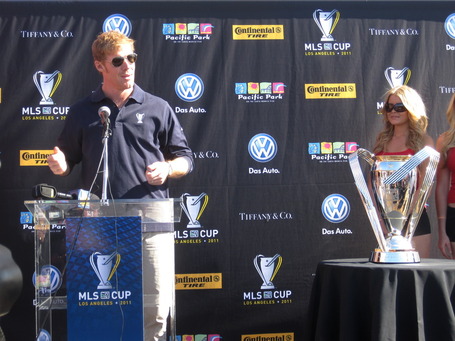 After the formalities ended, Lalas and Cienfuegos were made available for some one-on-one time with the media. Thanks to Twitter, I was informed that Omar Gonzalez had just been named Defender of the Year, so that was the first thing I asked Lalas about. His response?

"Oh my God! It's such a surprise! Really, it's a no brainer. The way that he played and how important he has been to the success and the style that the Galaxy has played, it's an absolute no brainer."

Staying on Gonzalez for a minute, I asked Lalas what a lot of LA Galaxy fans have been wondering lately: what does skills does Omar have to improve to get a US Men's National Team call-up?

"Distribution, his composure when he has the ball, to be able to have the confidence to get out of pressure situations and find the correct ball. And he's a big guy, so he's not going to be the quickest guy. I know all about that, and your ability to recognize dangerous situations and not put yourself in those...his ability to not put himself in situations where he's exposed is going to go a long way in terms of his success."

I again took to Twitter to see if there was anything people were itching to ask Lalas. A surprising amount wanted me to ask him about his beard, and if it would ever make an appearance again. Based off his answer, I wouldn't hold your breath.

"I did my time when it came to facial hair, and I did it--if I do say so myself--pretty well. Or, big. But people don't realize how much maintenance it is, they think you just let it go and that's it.

Oh no, there's hot oil treatments, there's making sure that you maintain the proper consistency...there's a massive amount of time and grooming and resources that go into doing something like that, and I just don't have that type of time."

I now know way more than I ever wanted to know about Alexi Lalas and his beard. I blame Twitter!

We closed on a more serious note, another question that has been rippling through the Galaxy fan base: what happens with David Beckham at the end of the season?

"I think a lot depends on whether we have that 'money shot' at the end of Sunday, where [Beckham is] sitting there next to Phil Anschutz and the confetti's coming down and he's holding up that MLS Cup. That will kind of bookend his time, and enable him to go ride off into the sunset in a very positive way.

It doesn't mean he's not going to live here in Los Angeles, I think he and his family are very, very happy here. But as far as his future from a soccer perspective...there's gonna be some teams that are gonna give him a tremendous amount of money to go play for them."

The way Lalas makes is seem, it's either lose the Cup or lose Beckham. I hope that's not the case, but it's a distinct possibility. We just have to wait and see. Until then, all eyes are focused on that beautiful, shiny trophy. 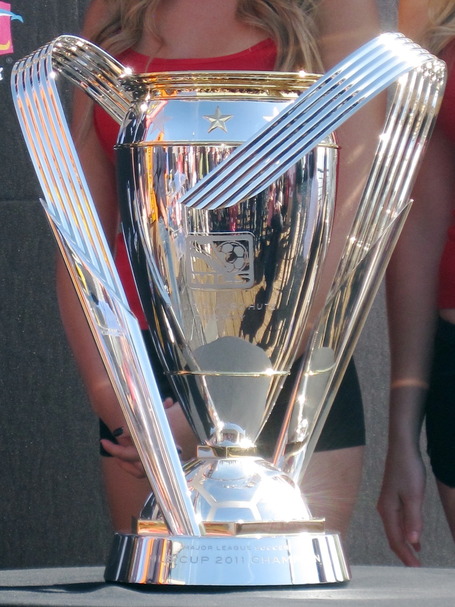